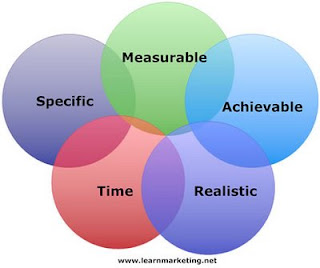 Remember when we went on all those training courses from work (and the Lib Dems for that matter) when we had it drilled into us that our objectives had to be SMART? Woe betide you if you came up with a set of plans that were vague, unrealisic, unachievable, unmeaasurable or not given a target time.

Compare and contrast with what Labour, after 13 years in office, are now offering us as their pledges for the coming election:

What in the name of the wee man does any of that lot actually mean?

Let's take them in order:

Well, you know, you've had a year and a half since the meltdown, when you had to bail out the banks. Your idea of security seems to be giving the banks all our money and continuing to allow them to crap all over us. It makes me so mad every time I see a sports event sponsored by RBS when sustainable small businesses struggle every day to get that bank (and others) to lend them money to keep them going.

Ok, we agree with Labour broadly that the fiscal stimulus was right, and we have to be very careful to make sure that we don't extinguish the very fragile flame of recovery, but Vince Cable's plans are much more detailed and credible than anything Labour has to offer. No wonder almost a third of people want him as Chancellor


What does that actually mean? How? And don't people who live on their own, or pensioners, get a look in here?

Also tell that to the number of families who are struggling to repay tax credits wrongly overpaid to them through no fault of their own. Many will be struggling with this for years.

Tell that to the children who are in the poorest homes - that's where one parent is working on a low income, just above the threshold for any help.

Tell that to the 1.8 million people across the UK who are waiting for affordable housing.

Again you really don't know what they're promising you. I thought it was interesting that nowhere in these pledges is the word "green". Do they not get that investing in renewables and green energy is the way forward?

Again this could mean anything. What frontline services? What can people take as a guarantee from this? Does it mean that I'm going to get the drugs I need for my rare condition? Does it mean that my child will get a decent education, no matter where they live? The choice of the word protect is very interesting, too. It doesn't signify any sort of improvement. Compare and contrast with the specific Liberal Democrat plans on education and making sure that this generation of school leavers isn't lost, or let down, like those brought up in Thatcher's Britain.


How? Apparently there's a plan to allow people at public expense to get a civil injunction to tackle anti social behaviour. That sounds like it's almost creating another level of bureaucracy to wade through. Why not just ensure Councils and communities have the resources to sort the problems?

And if you really want to give power back to the people, why not take real, meaningful action to clean up politics, like the Liberal Democrats offer?

Nick Clegg outlined in January our four steps to a fairer Britain:

Fairness is the thread that binds all our policies together as we offer:

Fairer taxes that put money back in your pocket.You will pay no tax on the first £10,000 you earn – cutting most tax bills by £700.

A fair chance for every child. Recruit more teachers and provide more one to one tuition to help struggling pupils.

A fair deal for you from the politicians. Make politicians accountable and give you the right to sack corrupt MPs.

A lot SMARTer than anything Labour has to offer now.

I thought about looking back at Labour's pledges through the years and then I found Channel 4 had done it already. Note how SMART Labour's pledges were in 1997 and 2001 and how woolly they were in 2005 and now.

I've thought for a long while that Labour have nothing but a record of failure and stoking up fear of the Tories to bring to this campaign and their weak and insipid pledges bear that out.
Posted by Unknown at 10:39 am

I have made posts on my blog critical of Vince Cable. Perhaps you could take a look. At the very least, we could have a discussion.

You may think Mr Cable's plans are credible. It is easy to make that assertion but can you back it up with anything?

The details are key and I cannot find any lib dem site explaining, for example, why his plans for the banks make sense. Can you provide a link?