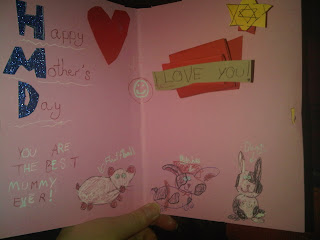 I always find it almost unfair that I not only get to be the mummy of a lovely, funny, quirky, confident, individual little girl, but that once a year I get presents for that too. While I really appreciate the chocolates, it's the hand made card above that is so special. And the text message she sent first thing this morning.

I should also say that my husband is also deserving of praise for today. He's about to cook me a luscious steak. I'm so glad that he's been so concerned for my iron levels that he feels the need to feed me fillet steak every so often.

I do feel very lucky that I've been able to experience the wonder of a mummy-daughter relationship. I just hope that it continues to be this special and that the foundations are strong enough to handle whatever they need to handle in the years ahead.

Anna doesn't seem to mind that I'm not the sort of mummy that bakes and cleans and tidies and that at times she pays second fiddle to the Liberal Democrats, or very rich men driving cars round a racing track, or this blog. She does get fed, and her clothes are generally clean, but that's as far as my domesticity goes. We get on well, though - and I think she knows that if she needs me, then everything else will get dropped. I never wanted her to doubt for a moment that she was loved and treasured.

I do think generally that mothers get a raw deal in our culture. We don't value the art of mothering. We don't give mothers confidence that their instincts will get them through. We have a succession of self styled experts like Gina Ford and Jo Frost who undermine women's confidence and instincts. We reduce the gentle art of raising a child to a follow by numbers process and in so doing, we take a lot of the joy out of it. We expect women to be "back to normal" within weeks of giving birth when the physiological truth is that it takes your body about a year to recover from the process.

Because we attach a disproportionate worth to economic output, time spent raising a child to be a confident adult isn't seen as important. However, when things go wrong, who gets it? Mothers do, of course. As far as the likes of the Daily Fail are concerned, all the evils of the world can be be blamed equally on mothers who stay at home on benefits, or mothers who work. Whatever mothers do, it's going to be wrong and we just lump guilt on to them.

We'd actually do a lot better if we actually supported mothers and enabled them to do their job. Starting with providing proper breastfeeding support - one of the reasons I got into that was after reading that of all the mums who gave up in the first 6 weeks, 90% didn't want to. We could realise that supporting a new mum is better done by helping out with practicalities like cooking and washing and not marching in and taking her baby off her and cooing all over it, unless she actually wants a break. Then we could be a bit more flexible about employment, about how we structure our political institutions so that women in general and mothers in particular aren't excluded.

Wouldn't these sorts of things be of much more valuable to mothers than one day a year when they get chocolate, flowers and breakfast in bed?
Posted by Unknown at 6:34 pm