David Miliband and the curious loss of persepctive 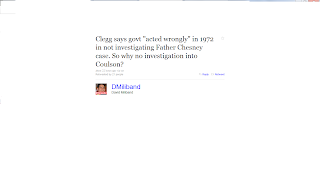 It's definitely not like me to write two posts about David Miliband in one day, but he's provided me with the material. I was shocked by the lack of judgement in his tweet above during PMQs yesterday.
Equating the Claudy conspiracy with the allegations against Andy Coulson case, covering up complicity in murder as regards unproven allegations on phone tapping which the Police are continuing to investigate is surely unbecoming to a man who thinks he's got what it takes to be Prime Minister.
This is a prime example of failing to engage your brain before you tweet, but I am very wary of the sort of instinct that can be behind such a thought.
Posted by Unknown at 11:14 am