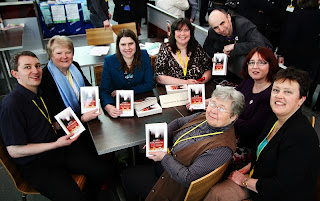 In amongst all the political skulduggery at Conference, there was a quiet moment of literary celebration as Scottish Deputy Leader and East Dunbartonshire MP Jo Swinson gave away copies of one of her favourite books, Kate Atkinson's Case Histories. The photo shows, clockwise from left to right, Andrew Page, who blogs at A Scottish Liberal, Cathy McInnes, Jo Swinson, me, Stephen Glenn (yes, him), Highland Councillor Angela McLean, Jean Davis, formerly candidate for the Western Isles and Eleanor Anderson who was my campaign mummy during the Livingston by-election and who has been a great friend ever since. Update; I was mortified to have it dawn on me, mid wiggle (or should that be wobble) at my Zumba class that I had forgotten to credit Jamie McHale, who took the excellent photo and gave me permission to use it. It's a million times better than the crappy one I took on my phone, that's for sure.

The idea of the giveaway was that 20,000 people were each given 48 books to give away to whoever they chose. Jo had given some copies away to a Women's Group in Perth that morning, and would distribute the remainder at a constituency event that evening. Each book has a unique number as you can see here: 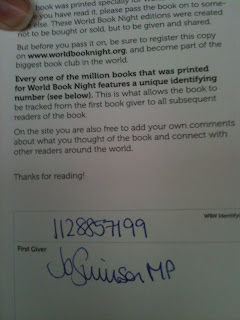 Once I've read the book, I can go online, give my comments on it and so can the person I give it to, and so on, so people will be able to follow the journey of that particular book and the 999,999 others given away.

I read this piece on the Spectator Coffee House blog criticising the initiative on the grounds that giving stuff away free diminishes its value. On the contrary, being given something by a friend that they've thought about and recommended enhances its value. And just because something is free doesn't mean its not essential or unappreciated. I don't pay for the air I breathe, but I'm very grateful for it - and books are just as important to my quality of life. While I share the author's concern about the demise of independent book shops, in my experience reading books just leads to buying more books. The real issue is of course the competition to book shops from the likes of Amazon, but that has nothing to do with this giveaway. One thing I would say, though, is that restricting it to 25 books is probably too small. I'd rather something a bit more organic, and maybe with a few orientated at children and teenagers too.

I liked the way that Jo took time to explain why she enjoyed the book, when she'd read it and to give us a few of her thoughts on it - enough to make us want to read it, but not to give us too much information about the plot.

Also for World Book Night, my new found favourite author Keris Stainton was interviewed about her writing in general on BBC local radio. It's available here from around 1hour 5 mins in. I read her first novel, Della says OMG which is such a good, positive account of first love. Keris talks about how Della would appeal more to girls, but boys have told her that it's a good read to help them understand girls. I think it sets the bar quite high about what girls should expect from relationships, which can only be a good thing. Keris' new book, Jessie <3 NYC, aimed at teenagers, is out this July. I am looking forward to reading it as I love Keris' characters, and New York is one of my favourite cities.
Posted by Unknown at 9:48 am