Nick Clegg and his big mouth!

I have so much to tell you from Scottish Liberal Democrat Conference that I hardly know where to start. Maybe this little anecdote will be an amuse bouche for what's to come.

You might remember last October, when they let me loose on Lib Dem Voice, I had a chat with Alexandra White, who, at just 14, had wowed the Conference with a passionate speech on education. Well, she did it again yesterday morning in the debate on sentencing for drugs offences. Unfortunately, I didn't see her speech as I had to be somewhere else at the time, but I'm told it was extremely moving and people were talking about it all day. One sign of a good public speaker is the ability to speak with feeling and clarity without notes, but that's not something you can do at 14 - unless you are Alex, of course. I asked her for a copy of her speech and she said she didn't have one as she'd just made it up as she went along. This girl is definitely one to watch for the future.

Anyway, yesterday Deputy Prime Minister and UK Party Leader Nick Clegg was up to lend his support to the Scottish Election Campaign (and more detail about his speech later). After he spoke, he was chatting away to Scottish Party Convener Craig Harrow who told him that they were giving out the annual award for best speech to a 14 year old called Alexandra who had spoken about drugs. What he didn't tell Nick was that this was top secret and was intended to be a surprise to her when it was announced at the end of the day.

That was ok, though - he'd already met her and was unlikely to do so again, at least yesterday. You know what's coming, though, don't you? Alex ended up taking a photo of a friend of hers with Nick. He put two and two together and said, with characteristic enthusiasm, "Oh, you're the Alexandra who's getting the prize for the best speech. Well done."

In Alex's own words "My jaw just hit the floor".

I asked her later on whether she would have preferred it if it had been a complete surprise and her reply was that finding out by accident from the Deputy Prime Minister made it extra special, and gave her a story to tell for the rest of her life.

Alex's prize was the Russell Johnston Trophy, a silver sporran flask, which was first presented to Sybil Alexander in 1990. Previous winners include Alistair Carmichael, Tavish Scott, Jim Wallace, Edinburgh Council leader Jenny Dawe and Ross Finnie. Alex is in some very good company. Her name will be engraved on the plaque which accompanies the flask, ensuring her of a place in the history of the party. 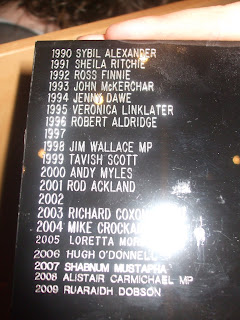 Here is Alex, with the trophy itself. 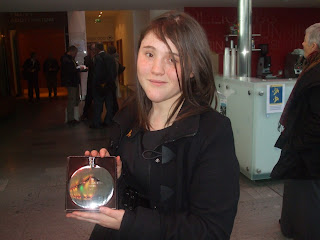 Alex can be very proud of herself for the impact she's had on the Party so far. What yesterday's award shows is that the Party is proud of her too.
Posted by Unknown at 9:29 am

I'm sure Alex has a fantastic future in politics ahead of her. Not in the libdems though, obviously, as you lot are going down the toilet faster than a small turd.