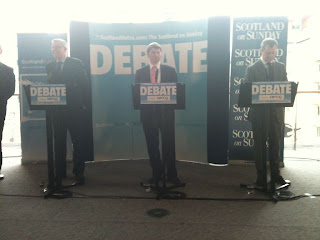 Here are three of the four particpants in the last of the four Scotland on Sunday debates which took place yesterday. John Swinney, whose elbow you can just see on the left,  Labour's Andy Kerr, Conservative Derek Brownlee and Liberal Democrat Jeremy Purvis lined up to quiz each other and take questions from the audience and online observers on the economy.

These debates have generally been useful. Held far out enough from the heat at the nucleus of the election campaign, they've been generally good humoured and good at highlighting the difference in approach between the parties. There was a bit of needle between Nicola Sturgeon and Jackie Baillie last week, and yesterday there was a whispered conversation between Andy Kerr and John Swinney after which both of them looked a bit grumpy, though.

The issue with them being so far out is that they are before the manifesto launches so parties are keeping a certain amount of their powder dry. They also don't have to answer any uncomfortable questions as to how much their plans are going to cost.

The debates were moderated by Kenny Farquharson, the editor of Scotland on Sunday, who did a really good job. He had enough needle to get them out of their comfort zones and just the right amount of menace to try to drag some skeletons out of their closets.

Like the others, yesterday's debate started with two minute opening statements, which is enough to give the highlights and not long enough for elaborate waffle. Then they each got to ask one question of each other. After that, questions from those watching both in the room and online were taken before a one minute closing statement.

Thanks to Andy Kerr's car breaking down, the thing started half an hour late. That might excuse what was a very poor performance from him. He spent his time slagging the SNP, most viciously on the cancellation of the Glasgow Airport Rail Link, which prompted the mutual grumpiness or saying not much. I must have misunderstood what he said about Labour's manifesto not being costed because there were plenty of organisations who would do it for them post publication. That attitude certainly seems typical of Labour - we've seen the financial mess they've left us to clear up at Westminster level and locally in places like Edinburgh and Fife. Bung it on the credit card and sort it out later seems to be their mantra. Lallands Peat Worrier, by the way, is wickedly and hilariously cruel about his performance, so go and have a look later.

I was quite surprised to see Tory Derek Brownlee readily agree that Scotland should be included in the consultation on Corporation Tax that the UK Government is having with Northern Ireland, saying that if these changes were possible in one part of the UK, it would be foolish to rule it out for others.

John Swinney was competent but uninspiring. He was lucky nobody reminded him, on a question about whether the "tartan tax" could be used to avoid cuts, that he was the one who had let it lapse without telling the Parliament.

I know Jeremy Purvis is one of mine, but I was really impressed with him yesterday. I was sitting there in the audience like a proud parent. Ok, so I'm not nearly old enough to be his mother but I did assess him on his candidate approval day in the run up to his election in 2003 and it do tend to beam with pride when any of my candidates do well in things, as a fair few have.

Out of all of them his language was clearest and his proposals most practical. He talked about preventing a power grab to the centre, instead providing joined up solutions at regional level. About regional development banks to give practical help to businesses. The reason for the change is simply the massive and unhelpful bureaucracy often faced by business. He illustrated his point with a real life example of a textile company passed from pillar to post round various quangos, none of which would give them the help that they actually needed. He talked about making sure Scotland had the infrastructure and things like broadband connectivity to boost business and growth and ultimately jobs.

What was interesting from him was an admission that the Council Tax is here to stay for this Parliament at least so it doesn't look like Local Income Tax will be in our manifesto this time. However he did say that we were bringing forward proposals to make the Council Tax system fairer and that its ultimate replacement would be fair and based on ability to pay.

Of the four debates so far, justice and health have been my favourites, but I guess that's not surprising as they're the subjects which interest me most. I'm going to try to go to a few more such events as the campaign hots up - if any one lets me and my serial tweeting habit in, of course.....
Posted by Unknown at 3:05 pm

"He was lucky nobody reminded him, on a question about whether the "tartan tax" could be used to avoid cuts, that he was the one who had let it lapse without telling the Parliament."

Going down the Labour road of telling lies on this as the last LabLib administration let it lapse. It was unworkable anyway as has been admitted by Westminster's mandarins.