Politicians show their good side at Breakthrough Breast Cancer debate

On Wednesday evening, Breakthrough Breast Cancer held a pre-election hustings on Women's Health in a Recession at the Scottish Storytelling Theatre in Edinburgh. Six politicians gathered to discuss issues from cancer treatment and detection to increasing breastfeeding rates. The photo shows the panel, from left to right: 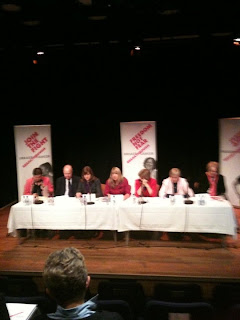 Beforehand, we'd chatted over coffee outside. I was blethering with Ross Finnie. He'd spent the whole weekend at Conference darkly warning that if he made any pledges that cost money, Jeremy Purvis would appear in a puff of smoke and tell him off. I told Ross that I was there as Jeremy's spy and would tell on him. You could tell he was petrified at the thought. Nicola Sturgeon then appeared and Ross introduced us. She said "Ah, are you Twitter Caron?".  We had a very enjoyable chat about Twitter. She said she really enjoys it - and you can actually tell. She's one of those politicians that get it's about a conversation not a broadcast. Later on, she said it was quite disconcerting to be answering a question in someone who was tweeting the answer as she said it. I guess someone is taking down her every word as she utters it in the Parliament, though, so it's not so different.

An amusing aside was that so many people, including Nicola and Jackie Baillie, had trouble getting hot water out of the flasks. I'd taken the coward's way out and gone for the coffee, which was much easier to operate.

We were told the Twitter hashtag at the start of the meeting, which made me think that there would be lots of people voraciously tweeting. When I checked out our little corner of the Twitterverse later, I discovered, to my slight embarrassment, that it was in fact just me. Twitter works best when there's more than one perspective on it and with the best will in the world, there's no way I could capture everything, and you tend to hear things that you are interested in more clearly. However, out of 34 tweets, only 2 of them could be construed in any way as party political and I did try to capture the best of everybody.

With just an hour, and six panellists, there was only time for 3 questions, which were discussed in some depth. First, though, each gave a 90 second summary of how their policies would impact on women's health in a recession

Jackie talked about the need for flexible childcare and a living wage, along with a 2 week cancer guarantee treatment time and the need for preventing rather than curing.

Ross spoke of need for early diagnosis and treatment and, not surprisingly for a Liberal Democrat, emphasised the need for services in the community, as close to people as possible.  He also spoke out opposing what had been said by the Scottish Breast Cancer Campaign, reported here in the Herald, about the breast screening programme. The SBCC thinks that women who don't necessarily need treatment are offered it when pre-cancerous cells, which may not necessarily develop into active disease, are detected in routine mammograms. Ross said that he could not countenance any diminution of the screening. There was a slight frisson of controversy when the SBCC Director later asked a question although she made it clear that that wasn't the time and place to have that discussion, but she'd be happy to talk to Ross at a different time. Maybe the untimely deaths of two close family members to this disease has coloured my opinion, but I just wonder if earlier diagnosis and treatment might have meant that Anna would still have a paternal grandmother and aunt to enrich her life. I lean towards Ross on this one.

Alison talked about the need for a holistic approach to health and in particular greater understanding of the environmental impact of chemicals we use in our daily lives as a matter of routine.

Nicola said that the SNP would protect the NHS budget, and would introduce a living wage and spoke of the need for much more to be done on lifestyle issues, particularly alcohol. I thought there might have been a bit more of a discussion on minimum pricing later on, but it wasn't mentioned again.

Nanette said the Tories would implement greater screening for those aged 40-74, £20 million for more health visitors and a Cancer Drugs fund.

Margo said she tended to agree with Alison's holistic approach and, although I can't remember the exact context, said Ross Finnie was a sweetie. He blushed.

As Jackie and Nicola both mentioned the living wage, it's worth adding in here that the raising of the tax threshold for those on low and middle incomes does much the same thing - and that will hopefully get to £10,000 by the end of the Parliament. That is a real achievement of the Liberal Democrats in the Westminster Government and it also applies to everyone, including pensioners, not just public sector workers.

The first real question was around how do we make sure that women look after their own health during austere times when they are more likely to be stretched looking after everyone else and probably suffering most from the effects of poverty. Everyone agreed about the need to make sure more women went for screening, picking up more Cancers and saving lives. Nicola said that getting treatment quickly was important, but that too many people are diagnosed too late to have any sort of a cure, so getting people educated about signs to watch out for, tailoring the message to different audiences, was really important.

The only real disagreement on the panellists was on the question of the idea of a Cancer Drugs Fund. The Tories were well in favour, saying that it was wrong to do things differently from the rest of the UK. Ross Finnie for the Liberal Democrats was equally adamantly opposed, saying that it was intellectually incoherent to undermine the Scottish Medicines Consortium. He said that if things needed changing, then the way to do it was to change the SMC's operating criteria. The others were various shades of maybe - Nicola talked
about the possibility of exceptional prescribing, and also said the issue raised ethical questions the bitggest of which was why just Cancer drugs? She said her postbag contained requests for Alzheimers drugs among other conditions & that more people were cured by methods other than drugs. Jackie Baillie said that she felt that the Jury was still out, as did Alison Johnstone. Margo was quite stark and realistic - saying that when resources were limited, we had to make hard choices about our priorities and that can be quite difficult to face up to.

Then it was my turn to ask a question. Regular readers here will know my interest in breastfeeding as a former breastfeeding counsellor. When I start to talk on this subject, donkeys across the land fear for their hind legs. I asked simply "What's your big idea to improve breastfeeding rates?" I will write a longer post analysing their replies and adding a few of my own ideas, but I'll just say here that I was impressed with the different perspectives each brought to the debate. Margo was down to earth and hilarious, talking about how she was something of a novelty in her Lanarkshire maternity hospital, being one of the rare breastfeeding mums and was often seen by visitors with nursing baby in one hand and cigarette in the other. Nanette spoke of difficulties arising because of mums being discharged from hospital mostly just hours after giving birth. Nicola talked about cultural barriers, and how important it was to make sure that people didn't feel lectured at or guilty for the choices they made. For Alison the key was better information and support, a point taken further by Jackie who spoke of the value of ordinary women supporting other ordinary women, without medicalising it, without uniforms. Ross, as the only man on the panel, spoke of the barriers put in the way by men and the need to tackle them. Both Jackie and Ross paid tribute to Elaine Smith who introduced the law which protects women who want to feed their babies in public places.  I remember it taking quite some doing to get the Government to support the Bill when it was brought in, and I'm glad everyone's now singing from the same hymn sheet.

There was then the opportunity for the audience to make some brief points before closing statements. Many people talked about lymphoedema. Margo talked about the importance of teaching massage techniques to carers and people who have the condition and Alison, who is an athletics coach said there were sports massage techniques which could help. Jackie said that when times were tough, people expected politicians to work together. If the panel can just get that through to Iain Gray and Alex Salmond, that'd be fabulous.

And look who I caught up with for a photo. 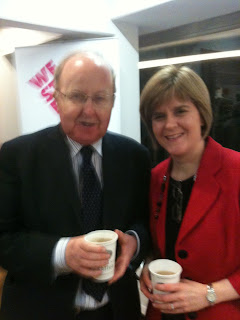 You don't often come out of a political debate in the run up to an election feeling all warm and fuzzy, that you've learned something and that the politicians are all totally engaged and interested, but this was an exception. Of course there are some major caveats - if they can't behave themselves at a cancer charity hustings, there really is no hope. I'm also sure that the fact that there were so many women, not just in the panel but in the room, had something to do with the civilised atmosphere. And most importantly, there was an unusually high level of consensus because there was no discussion of the really controversial issues. Free prescriptions weren't even mentioned, for example. However, all of the politicians came across extremely well, and Breakthrough's key messages were well discussed. A win win for everyone, I'd say.

You can judge for yourself with this short video Breakthrough have put up on their Facebook page.
Posted by Unknown at 2:00 pm