Well, I'd planned an early night and a glass of wine, but Ellen suggested I take part in Transatlantic Blonde's Feminist Friday series. Today we're talking about gender stereotyping our kids, or not, as the case may be.

When I was a little girl, I had zillions of dolls and the only real thing, apart from writing,  I have ever wanted to do was to be a wife and mother. I'm not sure the dolls caused that, though. And I'm quite happy with the wife and mother thing, too. We will never know if things would have turned out any different if I'd had dinosaurs rather than dolls, but by the time Anna was on the way, we were both quite aware of the effects of gender stereotyping and expectation and we were clear that we didn't want her to be constrained by it.

I guess the priority for my husband and I was that our little girl should first and foremost grow up feeling secure in herself and confident in her abilities so that she could feel free to succeed at whatever she wanted to do. I hadn't felt particularly free to express myself as a child and I wanted her to be in an environment where she could always be herself, to expose her to as much of a range of interests and toys as we could and let her gravitate towards what suited her.

We wanted to keep her out of the clutches of the clever marketing people for as long as possible and though she had loads of toys, we tried to keep them as gender neutral as possible in the early days. No screaming, garish pink or anything like that. We also wanted her to grow up with the idea that she made her own destiny and didn't need to wait for a prince, handsome or otherwise, to do it for her.

And so it came to pass that a personality with quite eclectic tastes evolved. She did the Disney thing, big time, with all the princesses and everything. I tried to temper that with subtle exposure to a more feminist approach. During one Edinburgh Festival, for example, we went to see a really good play about another Princess who informed her parents in no uncertain terms that she wasn't going to get married, she was going to go travelling and off she went. And she solved a lot of problems and rescued a lot of people along the way. Well, maybe not so subtle, but it was well done and very funny.

The things I dreaded most were Barbie and My Little Pony. I'd had Sindys, because they had brown hair like me - but they, too, had succumbed to peroxide by the time Anna could have shown an interest in them. My Little Ponies were the most glaikit looking bits of garish glittery nonsense. Utterly loathsome. Well, my girl has always preferred animals to dollies, so our involvement with Barbie was fleeting. In fact, I think we only had one because it came with a carriage and horses. Unfortunately, the ponies were around for longer. She loved them. They made me wince, but I had to embrace them. Imagine my guilt when she told her daddy, at the age of 4, that she wanted to ask for ponies for her birthday, but she thought she'd better not because Mummy didn't like them. Mummy had to tell her that it didn't matter what Mummy thought - if she wanted something so much, she should always feel free to ask for it.

So, yes, we had princesses and ponies, but at the same time, she was obsessed (for she's a bit like her mother, that way, she doesn't really do casual interest, it's all or nothing), with planets and space. On our study wall is a picture she painted at nursery depicting the sun and all the planets, including Sedna, which had a temporary flirtation with that status. 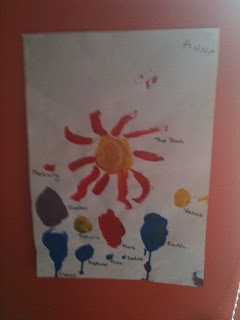 Her pre-school DVD of choice was Walking with Dinosaurs. To this day, she remains fascinated by both space and dinosaurs. She was thrilled when one of her school topics this year was space. They had to invent their own planet. She was having none of this call the planet after some bloke business - hers was Aphrodite.

While the girls at her school have been getting more interested in fashion and make up, she's been catching up on almost 50 years of Doctor Who. She loves the old stuff too, especially if it involves Tom Baker. I am having trouble convincing her of Sylvester McCoy's merits, though. I mean, how can anyone think Silver Nemesis is boring?

She's blossoming into a geek with attitude now - she went to school the other day with her towel, for Towel Day, in celebration of Douglas Adams' work.

I've been quite horrified to see men I thought were sane and rational have a complete hissy fit at the sight of their son in a tutu or wearing cloppy shoes. There was one guy who, actually, turned out to be a complete nightmare, whose son just loved dressing up in feather boas and Princess dresses, the more garish the better.  This sort of thing is ignorant, homophobic nonsense, which could cause untold harm one day.

Our philosophy has always been that of course we're going to inculcate some of our values into our daughter. All parents do, and it's not usually a bad thing. However, we also wanted to give her the space to be herself from the start. Clearly a child can't and shouldn't be expected to take life changing decisions, but their tastes and aptitudes need to be respected.

And I'll miss those ponies when they're gone. Don't ever tell anybody that.
Posted by Unknown at 8:55 pm

I think your approach is the same as mine: raising a child free of gender stereotypes. I want Blondie Boy to be himself regardless of what society says he should or shouldn't do.

I *loved* Barbies as a girl, wore ribbons in my hair everyday and shock of shocks was even in a pageant. Those things don't make me any less a feminist though, they just are not what stereotypes say a feminist should be.

All stereotypes are bad and I'd encourage anyone to avoid them and not let them influence you in anyway.

Thanks for taking part! Be sure to read and comment on the other posts when you get a chance :)

I think your daughter sounds hugely balanced. It's important kids get the chance to try on stuff for size be it My Little Pony or Pokemon.
I hope it didn't keep you away from your glass of wine too long.
E x

As a mom of a young daughter, I love this post. Thank you for your perspective.