Today Willie Rennie spoke to the media after being confirmed as the new leader of the Scottish Liberal Democrats.

He chose to do it in the Fife village of North Queensferry. The symbolism of that goes back 5 years to the day of the Dunfermline by-election, when the front page of The Courier carried a fabulous image of Willie and then leader Nicol Stephen at the top of the nearby Forth Rail Bridge with the headline "Too Close to Call.". Today, 330ft lower down, Willie clearly had his eye on the tough climb back to the top.

Here's Willie being interviewed by STV. You can see the actual interview here. The sun even came out - a good thing seeing as it has rained every day since the SNP won its overall majority. I'm sure it's just a coincidence but it's definitely worth a mention. 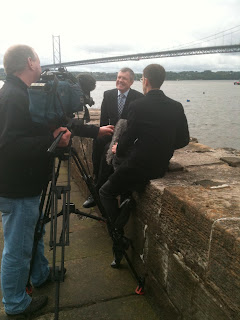 Willie chats to one of our youngest members, 17 year old Neil, and one of our longest standing members, Jimmy Gordon, who has just paid his 50th sub, having joined the party in 1962. 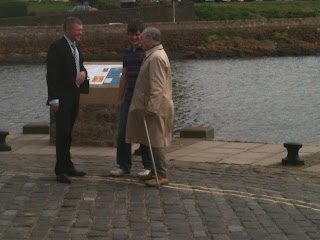 Those Forth Rail Bridge Towers. At the end of the bridge out of sight to the right is the hotel where I got married all these years ago. 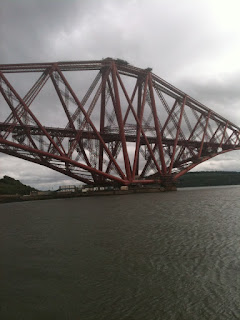 An animated Willie talks to journalists in a nearby hotel - we'd all got way too cold outside. 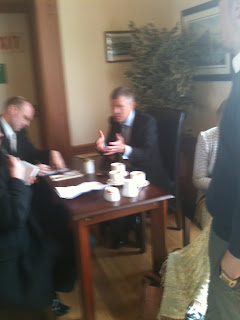 I also managed to record an interview with him. I'd asked for questions from Party members on Facebook and Twitter and was able to put some of them to him very briefly. I'm desperate to post it on Lib Dem Voice, but I can't because the site's down. There's some good stuff in there. You can tell that this is a leader who both understands and appreciates the party. That's all I'll say for the moment.
Posted by Unknown at 5:38 pm

Ha Ha - that's right Caron. No need to worry about Scottish Water with the SNP in charge. :-)

I like Willie but don't envy him his job. Perhaps he will be the one to embrace Independence for the LibDems.

After all what could be more liberal or democratic than having the freedom as a country to make our own decisions.