Yes, I was cross with Simon the other day, and I felt I had good reason to be.

The poor man may not have read that post, but he was on the receiving end of a pretty stroppy e-mail from me.

Last night he replied - and I'm not going to publish his reply because that wouldn't be right, but he said more than enough for me to forgive him. When somebody makes a mistake, you want to see them recognise it, and sincerely want to put things right. Suffice to say that if more people behaved like Simon when they made a mistake, the world would be a better place.

I don't expect him to solve the problem with these crass e-mails alone, though. Things have been an awful lot better since the Divine Helen Duffett has been in post as internal communications manager, but still there are things getting through that should never see the light of day. Some of them should actually have "Decree from the Ivory Tower" as their subject line for all the relevance they have in the real world.

Tim Farron was joking about on Twitter yesterday, saying how he tried to avoid being dishonourably mentioned here: 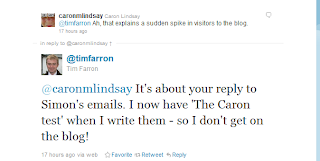 It got me thinking, though, about whether I should issue some guidance- what would pass the Caron Test?

Well, firstly, you don't have to mention Doctor Who or Michael Schumacher or Colin Firth, you'll be pleased to know - although I clearly wouldn't complain about it. There's no obvious tie in with Government policy and these magnificent individuals - although if you can find one, feel free to use liberally.

On a more serious note, I suspect that some of these e-mails will be written in opulent surroundings in the epicentre of the Westminster Bubble. The people who write them are all human beings, but it doesn't always come across that way. There's a strange sort of language that permeates these sorts of institutions, full of weird syntax and jargon, with zero passion. I heard it from my beloved when he went to work for a local authority. He would come out with the strangest sentences which no ordinary person would ever use. I don't really like the phrase "speaking human" but it exists for a reason. So, no institutionalised, lifeless language, please. Fill your remarks with passion and humanity.  If you're telling us about a policy achievement, tell us what it means for the people who will benefit from it in practical terms.

The same principles apply to e-mails as apply to Focus leaflets, although the time to hit the delete button is much shorter than it takes to get from letterbox to bin. Catch us in the first sentence. Make us want to read more.

Give us something we can use, too, to counteract the opposition's arguments. We went through a world of pain on tuition fees and I just wonder if we'd known about how much less someone on £21000 would pay right from the start, then it might have been easier to show why we did what we did. By the time that came out, we were already irrevocably tarnished and the only game in town was the fact that we'd broken the pledge, not that we'd actually made it easier for people who ended up on lower incomes.

Try and include some party news as well. If we've won a by-election, or someone's won an award, or someone we all know and love has died, give them a mention. Thank people for extraordinary efforts. I'm only talking about a couple of lines, but it could make all the difference to the overall tone if people feel our key players are connected to the party. And if there's been bad news, don't just ignore it - try and deal with it in empathy and understanding of how members will have reacted to it. And if you don't have that empathy, you're probably not the right person to be writing the e-mail. Find someone else to do it.

Remember that the reason you are writing the e-mail in the first place is because you are communicating with Liberal Democrats, therefore you have to frame what you say into terms Liberal Democrats will appreciate. Tug on our heartstrings. I've been reading some of Russell Johnston's speeches recently, and he talks about emotion all the time.  Don't just talk about the policies we are implementing, talk about our values in action.

Every e-mail should be people-centred, party focused, passionate, principled and practical. So, there you have the five key elements of the Caron Test, I guess. Can you think of any more?
Posted by Unknown at 10:33 am