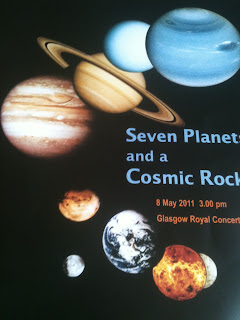 The National Youth Choir of Scotland celebrates its 15th birthday this year. It was set up in1996 to provide "high level singing opportunities for young singers" which it does through a network of area choirs. Anna has been involved in the West Lothian choir for five years now. NYCOS has given her many positive experiences and opportunities, but none quite as fabulous as yesterday's anniversary concert in the Royal Concert Hall in Glasgow.

Over 600 children arrived in Glasgow very early (having left home much earlier) yesterday morning for final rehearsals with artistic director Christopher Bell.  Anna was among them.

Having dropped Anna off for the coach at 7:40, we went home and dozed for a while before heading through to Glasgow. We had lunch at the Cafe in the Concert Hall - delicious sandwiches, but you need not to be in a hurry, as they make them to order, and are not what you'd call speedy. 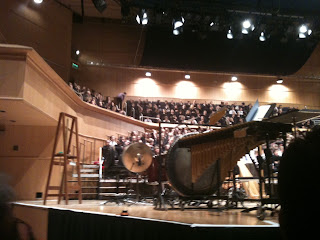 Our seats were in Row H, so I was surprised to find that they were in fact in the second row from the front. The difficulty we had, though, as you can see from the photo, was that immediately in front of us was the percussion section of the orchestra. We had little chance of finding Anna, or in fact seeing any of the singers on the lowest level. Or so we thought.

We couldn't see Anna anywhere. But it soon became clear that she was almost directly in front of us. If you looked through the frame of the gong, she was right there, only 4 or 5 rows back from the front. Not that we noticed. It was in fact the face recognition software on the fancy camera I bought Bob for his birthday which spotted her.

The concert itself was wonderful. We were quite taken aback at the complexity of the pieces our little girl could sing, from Mozart's Regina Angelorum, Franck's Panis Angelicus to more modern pieces specially commissioned for NYCOS.  The whole thing was an assault on our emotions, already a little tender after the bruising intensity of the last few days. By the end of the first piece, both Bob and I were blubbing - and trying ever so hard not to show it in case Anna saw and was upset or embarrassed.

The second half was devoted to a performance of another collection of songs commissioned for NYCOS, originally aimed at giving boys something interesting to sing about. There's a song for each of our fellow planets in our solar system and for Pluto which was demoted a few years ago which is the Cosmic Rock in the title.

I've heard a few of these songs before at various concerts, but never accompanied by the Royal Scottish Opera orchestra, and certainly never narrated by a real life genuine film star, Billy Boyd, who played Pippin in the Lord of the Rings movies. He's also in the Witches of Oz series which I hope we're going to get to see over here.

Boyd may well have been jet-lagged after flying in from LA, but it was Christopher Bell who went straight into the first song, about Mercury, without waiting for the actor to do his introduction. When Boyd later stumbled over the word "canals", Bell teased him for his mistake in return.

The music itself covered a whole range of tempo and emotion, from the sadness and hopelessness of Venus, our twin sister, ravaged by the effects of climate change, to Jupiter who started off as an angry King of the Gods and ended up as a jovial gas giant, to the almost mystical Saturn's Rings to some good old fashioned rocking it out with Pluto at the end. All of it was performed beautifully by the choirs. I'm sure you would never have known that the rehearsals that morning had been the only occasion they'd all been together. I always think it's incredible that conductors can keep control over so many people at once. Christopher Bell didn't miss a thing - a boy at one point was sitting with his chin in his hands while the girls were singing. Without missing a beat, the conductor pointed his baton right at him and the poor boy immediately sat up straight again.

The concert was a perfect showcase of the excellent work NYCOS does with these children. Like all such organisations, it's always living pretty much from hand to mouth. I hate to think what the cancellation of the Christmas concerts because of the weather will have done to our local fundraising targets. Musicianship is a very valuable skill, and helps develop intellect as well as creativity and self confidence. Cutting funding for the arts might seem like an easy option to some, but organisations such as NYCOS are a huge benefit to society in all sorts of ways and must be supported and properly funded.

Anna can now say that she's been on stage singing with an orchestra, one of the most prestigious choral directors of the day and a film star. It was an amazing experience for her. Let's hope NYCOS has many more successful years ahead of it, inspiring the next generation of singers.
Posted by Unknown at 2:53 pm

I was also at the concert as a parerent helper for NYCoS Dundee. What a wonderful concert. The children were so excited on the bus home.

I was also there as a parent helper for Falkirk. I agree with all your comments, all the children were fantastic and it was so emotional for us parents.