There would have been something very wrong with the Universe if we'd woken up this morning and there had been no post from Stephen in honour of Towel Day. This is the annual commemoration of Hitch Hikers' Guide to the Galaxy author Douglas Adams' work where fans carry a towel around with them for the day.

Anyway, I guess that even if the Rapture had happened on Saturday, Stephen's post would still have appeared. It led to the following exchange between me and my 11 year old:

"Aren't you going to put that in your schoolbag?"

"People will think you're a geek, though."

"I am a geek" she said cheerily.

The towel had its photo opportunity. 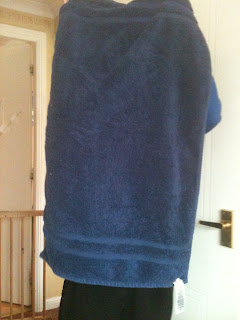 And so the captivating and hilarious genius of Douglas Adams thrills a new generation.

So long and thanks for all the fish.
Posted by Unknown at 9:08 am

The geek is very proud of Anna taking her Towel to school with here. Later this evening I've a bowls match so will know exactly where my towel is.

Actually Caron I didn't have any of my Towel Day posts scheduled before this morning...there are a number of them on the way though :-)