I decided that I wasn't going to take a formal role in any campaign, because I just am not physically well enough at the moment to sustain that.  I have dabbled my toe, and in some cases had a proper paddle in several campaigns across the country. I've just about got to the end of the campaign in one piece, although I suspect that I will just go to sleep at 10pm tonight and forget the results until the morning.

It's been the toughest campaign I've ever been involved in for all sorts of reasons. The good thing though is that I've had the joy of working with some absolutely fantastic people. I want to give a shout out to the staff at party HQ. Every one of them has been utterly awesome in challenging circumstances. They've done a great job and I want to buy them all lots of beer. I wish I could afford to buy Jenny Stanning the iPad she craves. Maybe if I win the lottery......... And spare a thought for Roger Reeves, Andrew's partner. It's his birthday today, but I suspect he'll be blowing out his candles alone.

I am going to single two people out that I'm keeping everything crossed for - I so want to see them in Holyrood for the first time because they would be so good for Scotland. 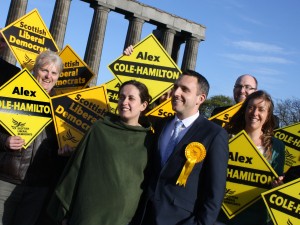 The first is Alex Cole-Hamilton  in Edinburgh Central and the Lothians list. If you live in either of these places, please vote for him. You will not get a better champion for children and young people in the next Parliament. It's annoyed me that this campaign has seen little meaningful mention of kids and their needs. His years' experience working for children's charities gives him exactly the sort of insight and perspective we need in there.

I have mixed emotions this morning because it is quite a compliment from Labour, a testament to his campaign which has clearly got them rattled, that they put out a leaflet personally attacking him. I'm just furious to see my friend treated in this way, though.  I suspect the best way to deal with that fury is to get into Edinburgh and get the vote out for him. 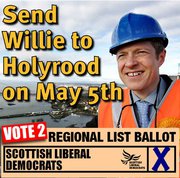 The second is that man Rennie, who's the top Lib Dem candidate on the Mid Scotland and Fife list.  When I walked up Dunfermline High Street with him, we invariably took ages to get from one end to the other. He was so well recognised and had helped so many people that he was always stopped to chat. What was particularly remarkable was that local young people knew who he was and felt comfortable about going and speaking to him. I want him in there because of his energy, his wisdom and his compassion. He is committed to evidence based policies on drug and alcohol abuse, he knows and understands so much about what businesses need the government to do to help them create more jobs. He stood up for businesses all across West Fife and will do the same across the region if elected. I am never this nice about him to his face, so please don't tell him, by the way. It would ruin my credibility with him.  If you live in mid Scotland and Fife, please vote for him.

Oh, and don't forget to vote Yes to AV too - simply because anything which gives more power to the voter has to be a good thing. It's not a coincidence that those who have wielded the most political power in this country for centuries don't want the change.
Posted by Unknown at 9:27 am