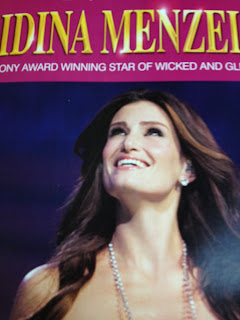 If you are a regular reader, you'll know a bit about my obsession with the musical Wicked and how I love its original green witch Idina Menzel. She has an incredibly rich and versatile voice that gives me goosebumps every time I hear it - and she is a long term campaigner on equality issues.

Idina played the Usher Hall in Edinburgh last night on the penultimate gig of her UK tour. Backed by an orchestra of local musicians and her own team from the US, she sang a huge variety of songs from pop, rock and musical theatre. It was the same set list as for her London show, here.  Her live performance was even better than I'd expected.

The show started with Idina singing Somewhere over the Rainbow off-stage. She then appeared, barefoot, wearing a black, sleeveless ballgown. There were comical moments when she tried to get up on a bar stool and her flowing skirt was having none of it. I liked the fact that the lady in the ballgown in front of the orchestra felt comfortable enough to say "f*** it" as she described why she ditched wearing heels because they were just so uncomfortable. Everyone laughed when she scanned the front row for straight men "as that would be an anomaly."

She told us how she'd been in bed until 2:30 pm. She's travelling with her 3 year old son ("he was in my belly, he comes with me," she told her husband) and she thinks he'll be old enough to remember our "beautiful city."

There was a really emotional part of the show where she paid tribute to her dear friend Marvin Hamlisch who died in August. I'm not sure I'd have managed to hold it together in her position, but she gave a beautiful rendition of "At the ballet" from "A Chorus Line", which was the song Hamlisch was most proud of having written. Idina had sung it at his funeral.

My three highlights were that, Joni Mitchell's "Both sides now" and, of course, "Defying Gravity". Some of you may think it logical that one of my favourite songs of all time is telling the story of the moment when the Wicked Witch of the West turns wicked. Actually, she's just setting herself free from an oppressive and unpleasant society, so it's maybe more sensible and liberal than you think. But anyway,  hearing Idina sing that song live was definitely one of the things on my Bucket List.

Six members of the audience had a treat as Idina got down off the stage with the help of a straight man from the front row and picked people from the audience to sing "Take me or leave me" from Rent. It seemed pretty random, but then I wasn't so sure because they all had amazing voices.

Idina was as warm and witty - and a little bit scatty - as I'd expected and the whole evening was wonderful. The programme, pictured above,  was cheap too - only £2.50. To my surprise, it wasn't sold out. Her last concert of this tour is at the Palace Theatre in Manchester tonight. If you're lucky, you might still get a ticket.....

I was fortunate enough to see Idina last year with Marvin accompanying her. They were obviously so close and I can imagine her paying tribute to him in a heartfelt way.

Sounds like another great performance from her through - I love the way her personality is so, like you said, warm during her shows.