One day, three good women and five things you need to get checked out

The subject of Breast Cancer is one which is close to my heart, having seen both my mother-in-law and sister-in-law die from the disease. It saddens me that Anna never had the chance to get to know these wonderful women. Her granny died long before she was born and her aunt died when she was just 2 and a half.

We've learnt much in the intervening years that might have saved their lives, both in recognition of the symptoms and in treatment. That's thanks to the work that organisations like Breakthrough Breast Cancer do.

Last Thursday evening, Breakthrough Scotland held their annual reception at Holyrood, filling the Garden Lobby with people whose lives had all been in some way touched by the fight against this disease. There were many who had been through it and come out the other side, others who were still going through that journey.

So, this is where the three good women come in. I might have my disagreements politically with Jackie Baillie, but she's a good egg and takes the issues around Breast Cancer seriously. She was on the panel at the hustings Breakthrough held ahead of the Holyrood election last year, where all the panellists showed us the best in politicans. She hosted the event and paid tribute to Breakthrough's work. 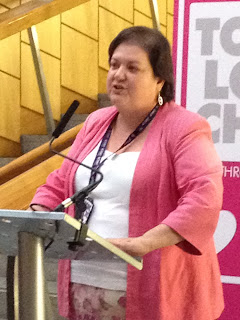 Next up was a lovely lady from the Borders called Elizabeth. She was making her first ever public speech and she did an amazing job. She told how the first years of this decade had been really hard for her, how she'd lost her much loved family dog and then her husband. She'd thought that the one thing she would never be able to cope with was a Cancer diagnosis. Sadly, she had to face that. She told how she hadn't realised that pain could be a sign of breast cancer until she mentioned it to a friend at work. That wise friend told her to get it checked out and it turned out it was indeed Breast Cancer. She wanted people to know that pain can be a sign that all is not well and you need to get it checked.

Elizabeth shared how the kindness of a nurse helped her in the moments before her surgery. She realised she'd left her picture of her husband on the ward. She ran off to get it and put it in Elizabeth's hand as she fell asleep and when she woke up it was there, too. That was an immeasurably comforting thing to Elizabeth. It's great we have such lovely nurses and we should appreciate them. 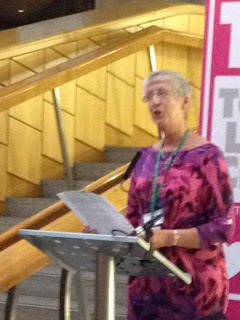 The final speaker was Breakthrough Scotland's remarkable and inspirational director Audrey Birt. She's suffered from Breast Cancer herself and writes about her experiences in her moving and honest blog. 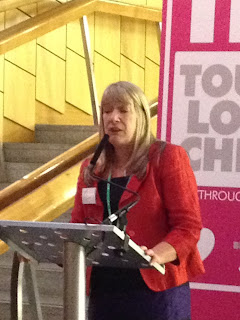 Audrey is the driving force behind the great things the organisation has achieved in the past few years. She has a super team of people, too. They're engaging with lawmakers and government, campaigning, facilitating research and providing expert help and support to women across the country. It stands to reason that the earlier cancer is diagnosed, the easier it is to get rid of. That's where the TLC (Touch, Look, Check campaign comes in. You can get your free guide here.


Five things you need to get checked out

We all know that if we get a lump in our breast we get to our GPs, but the presence of four other symptoms MAY indicate that all is not well. I've written a lot about how I object to putting breasts on Page 3 of a national newspaper for the titillation of men. However, when they appear as part of a groundbreaking ad campaign by the Government aimed at saving lives, it's absolutely fine. Elaine C Smith produced this excellent and informative video.

Controversial? Maybe. Lifesaving? Almost certainly. This Breast Cancer Awareness Month, spread the word of these five things - lumps, skin like orange peel, change in shape or direction of nipple, discharge from the nipple or rash/crusting.

Is the name of Breakthrough's latest fundraising campaign. Watch this video. I've seen it countless times and it has me bawling every single time.

Breakthrough funds Scotland's only dedicated breast cancer research centre. This costs £2,200 per day. Can you help them do that?