The No More Page 3 Campaign hurtles towards 50,000 signatures, and has attracted the backing of some more Liberal Democrat MPs, MSPs and councillors.

I asked Julian Huppert on Twitter why he supported the campaign and this was his reply: 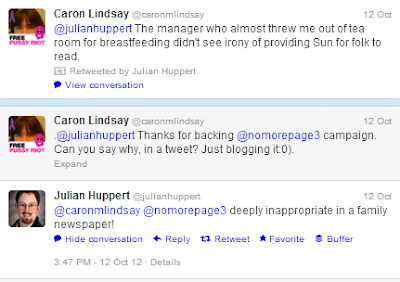 I'm pleased to see this - but there are still a good 50 Lib Dem MPs who have yet to sign. If you know any of them, why not contact them and tell them about the campaign and invite them to sign.

Tim Farron has not signed the letter, but he did tell me on Twitter the other day that he was not a fan of Page 3:

There are a couple of things I'd like to make clear, though. I might support the campaign to end Page 3, but that it doesn't mean I have either a hang up about nudity or sex. What I do object to is the exclusivity of one particular group of people being set up to be leered at, especially when that one group of people does not have an equal share of power.

There have been a few intelligent articles against the Page 3 campaign written by people I respect. Martin Robbins suggests the page 3 campaign is sinister and  makes it more difficult for mothers to breastfeed in public. I beg to differ with that one. I think that the presence of Page 3 actually encourages the idea that breasts are only for sex. I was almost thrown out of a tea room for breastfeeding Anna when she was 4 months old. The manager failed to see the irony of providing the Sun to read for her customers.

So what’s really the problem? I suspect the Page 3 debate may be asking the wrong question. It isn’t Page 3 (or indeed pornography in general) that’s intrinsically good or bad. The problems we see may be caused by a society that sends out all sorts of mixed messages about how men and women should be and behave.


It's all a bit which came first, the chicken or the egg. We have to look, I think, at who has the power in society and we find that, even in a developed industrialised, educated society, men have more than their fair share. Martin and Iain write from a position of privilege. I wonder how they would feel if the gender situation was reversed. If Page 3 showed pictures of men's backsides or worse every day, never any women at all. How would they feel if everywhere around them, there were women leering at these pictures of men saying "Ooh, I'd like a bit of that.". You'd also have to imagine that there were a majority of women in Parliament, as judges, that men were predominantly cast in caring roles and seen as responsible for domestic tasks. Add to this a situation where their female colleagues are paid around 15% more than. And then pile on top of that every magazine being filled with pictures of what men should look like, what weight they should be and how they have to stay looking nice for their wives or they'll be left for a younger, more compliant model. In short, a world made for women by women.

That's a bit how it is for women. It's not a mindset, it's an actual cultural phenomenon that needs to change. Page 3 is a symptom of the patriarchal nonsense that rules our world, not its cause. Nobody's arguing about that. Getting rid of it would be a huge step forward. Things have changed in the last 40 years, but not enough.

The 70s were the age of Benny Hill, of scantily clad women on beer cans, of Carry On films, of Miss World, of leering men with medallions. I grew up in that environment, bombarded with all these images and it certainly left me with a sense of injustice that women were treated as playthings just because they had breasts.

Things are a bit better now - sexual harassment, if not eliminated, is not tolerated and there are healthier expectations of appropriate behaviour at work. But there are vestiges of that very sinister culture which give out the same messages. Page 3 is one of them. Iain argues that there is no evidence linking Page 3 or porn to abuse. That's not what the Deputy Children's Commissioner told Parliament earlier this year. Young people are acting out what they see in pornography where often women are portrayed as mere receptacles, in subjugative roles. How much easier is that for young boys to think that sex is there to benefit them and them alone if they are brought up in an environment where women are depicted, in everyday publications, as sexual playthings? A whole generation of kids is growing up with some very harmful ideas about appropriate behaviour within a relationship and that way lies the potential for abuse to just get worse. Maybe the reason some sexual abuse doesn't get reported is because girls are growing up thinking that's the way things are. If that's the case, then that's a massive step backwards from the fair and liberal society we want to deliver.

Not only do we have the Deputy Children's Commissioner's evidence to go on, but Laura Bates from the Everyday Sexism project wrote an extremely disturbing article about the way young women are treated at university freshers' events and beyond. Particularly gut wrenching is the practice of "slut dropping."

The process, they explained, involves driving around town with friends in the early hours of the morning and offering a lift home to a young woman they deem a “slut” (usually a woman in a “post-club state”). After asking her address, they drive as fast and as far as possible in the opposite direction before forcing the woman out of the car and using a camera to film her “standing by the side of the road as they drive away”.  It’s difficult to know how widely this has occurred but the concept is reminiscent of a disturbing new trend of ‘slut-shaming’. On one occasion, the first-year added, it had taken the girl eight hours to get home. When asked how he knew, he explained that they were ‘friends’ on Facebook.

So, a young woman making her way home is subjected to a terrifying ordeal and left in a vulnerable situation at the hands of someone she vaguely knows. Can you imagine how she must have felt, how she must have feared for what was going to happen to her? The idea of decrying a woman as a slut just for having been at a nightclub and deeming she must somehow be punished should be repugnant to all. I have no doubt that some people will have a go at me for not being able to take a joke but I'm sure most people will consider it distasteful at worst.

When you are getting the Police called to schools because of Facebook pages giving the names of the establishment's "sluts and players", you know it's high time for some serious action on the issue. Education is always the key and it appears to me that kids need to get a few strong messages about what is appropriate behaviour.

I wasn't best chuffed to see Nick Clegg's take on the Page 3 debate as reported in the Guardian. He seems to have misunderstood what the campaign is trying to do, which is to get the Sun to realise that it's inappropriate for modern society and withdraw the feature itself. Nick is right that banning Page 3 would be illiberal, but it's not what the campaign is about. He said himself that he wouldn't have it in his  house around his 3 young boys. I was going to write a piece specifically around Nick's comments, which gained him the Sun's accolade of "Hero of the Week", but my colleague Paul Walter has done so admirably so I don't need to.

It's very clear to me that there are very frightening and worrying things going on as regards the treatment and portrayal of women and girls. This is very unhealthy and needs liberal action, urgently. Page 3 is a small but significant part of what's wrong. If that tumbles, it would be a symbol of progress being made. I actually think that the pressures on young girls have got much worse since I was that age - and as I have a teenage daughter, that worries me greatly.

If you agree with me and haven't already signed the petition calling on the editor of the Sun to remove the Page 3 feature, you can do so here.

I just don't understand Caron - the world you live in is completely different from the one I occupy.

The type of people you describe are not confined to a single sex. You continuously reinforce the dichotomous view that causes the issues you seek to address! You set women up as victims and men as aggressors who control everything - a lot of people really don't live like that any more, and haven't for a while. You say that this isn't the world you want, but I only recognise it in relation to you - my daughter didn't even know what Page 3 was until we discussed your opinions on it, which she just found bizarre and perplexing. What's more dangerous, naked humans or humans telling each other what to do?

You write as if you're a prisoner of unpleasant things, and I just can't see how you've got into such a situation. I suggest you stop watching the X-Factor, quit hanging around with Sun readers, move away from crass culture and surround yourself with nice people; break free and the problems you describe simply won't effect you any more.

Newspapers are dieing media, my kid sees more offensive material online than she'll ever see in a newspaper that we don't have around - wrong war, wrong time.