I'm certainly not going to get excited about a brief 3% increase in our poll rating, even if 15% is nearer where we have been in mid term even in opposition in previous parliaments. The ComRes poll in the Independent published today, though, doesn't make happy reading for either Conservative or Labour leaders.

Ok, so only 22% of people trust Cameron and Osborne on the economy, but they don't see Balls and Miliband as the answer to their prayers either, with only 2% more trusting the Labour team. If they can't get any traction from the luxury of opposition, they're not doing at all well. Maybe people remember only too well that they didn't fix the roof when the sun was shining and didn't save for a rainy day.

What can the Liberal Democrats extrapolate from this poll? Well, it was taken after five days of coverage in which we were talking about how we made the tax system fairer. So we need to talk more and more about that. Given by the reaction from Labour folk on my Facebook when I put up a picture showing how Liberal Democrats had cut taxes for people on the minimum wage, they know fine we're right. 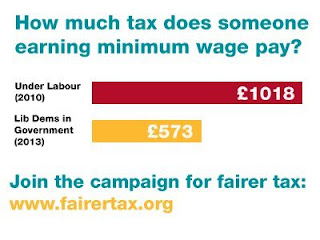 The Government has also put up the Minimum Wage by 11p per hour as of yesterday - although there's further to go on that issue as I'm not impressed that the rates for young people have firstly not gone up and secondly are so much lower than for over 21s. The different rate for 18-21 year olds is particularly iniquitous. Why should these adults be paid less than other adults? However, the increase in the adult rate is good.

But, anyway, fairer tax is where it's at. Labour's record is pretty shambolic. The top rate of income tax was less than it is now for all but 36 days of the 13 years Labour were in office and we have increased the Capital Gains Tax on the wealthiest and are looking to tax wealth more. Danny Alexander has directed more resources into scrutinising the tax affairs of the richest so they pay the tax that they are due.

If you agree with this approach, of cutting taxes for the poorest and raising them for the wealthiest to make the tax system fairer, please sign up here to the Fairer Tax campaign.

Nick Clegg talked about us getting out on the doorsteps to deliver 3 million leaflets on the Fairer Tax campaign by Christmas. This ComRes poll shows us that this would be a very good use of our time. Let's wear out some shoe leather.