An afternoon at Linlithgow Loch 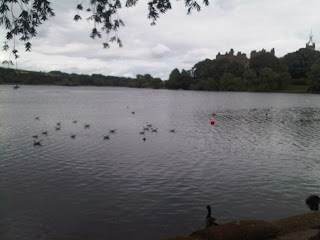 Yesterday afternoon, after much bickering about what we were going to do, we ended up at Linlithgow Loch. 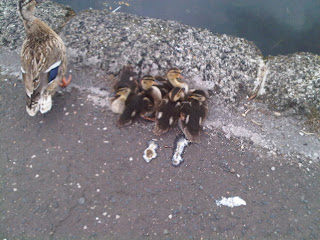 There we saw some very cute baby ducks all cuddled up together until one got adventurous and decided to go for a swim - but once it had got in the water, it found getting back out was a much taller order. 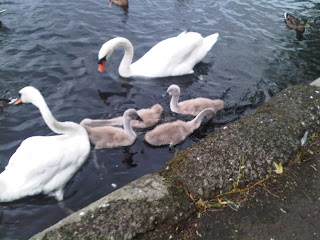 Then there were some cygnets. Their parents were more interested in eating whatever bread was thrown at them rather than feeding their babies. Anna had a lesson that nature is not cute and fluffy when Mama swan attacked an approaching gull with aggression. I thought she was going to kill it, but it got away.

After our walk, we went to Cameron's Cafe/Bistro and had the best cream tea I have ever had in my life. Devon can eat its heart out. Warm, home baked scone with generous helpings of jam and cream. It was sublime. And they do Fairtrade too.

It was a fabulous afternoon.
Posted by Unknown at 4:00 pm

Email ThisBlogThis!Share to TwitterShare to FacebookShare to Pinterest
Labels: Family

Ah'm chuffed Caron that ye had sic a grand day oot in the wee toun. Ah hope ye had a wee keek oot tae the island whaur the puir black bitch wis tethered tae the tree (as telt in ma Hound o' Love story, a shameless plug ah ken, but then, ah'm shameless me). Mibbe no a tale fer the wee yin quite yet, but yin day ye can tell her aw aboot it.