The #florenceprecious vigil in words and pictures 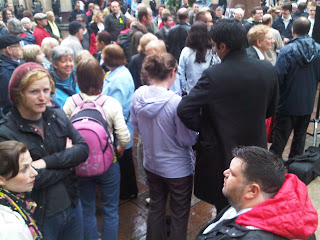 I know I've written a lot about Florence and Precious recently but I hope you'll bear with me for just another couple of posts. It was a well organised event attended by varying estimates - the Scotsman says 70 but I thought it was more like a couple of hundred and the Evening Times agrees with me.

I feel really now because I rather uselessly failed to notice the celebs in our midst at the vigil for Florence and Precious yesterday. I don't watch Scottish soap River City and although I saw the two people on the front of the Evening Times report, I didn't recognise them even though they appear in the bottom left of my photo 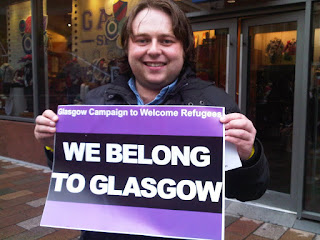 I did, however, recognise Mr MacNumpty, even though I'd never met him before. As an aside, we went for a drink afterwards - Anne McLaughlin had arranged for a nearby pub to let us use an upstairs room. Will, Anna and I ended up chatting away to a very nice SNP activist called Richard from Rutherglen. Poor Will had to suffer the indignity of Richard thinking not only that we were a family, but that he and I were the same age when in fact I'm about a decade and a half older than him. Richard is clearly now my friend for life if he thinks I'm in my mid 20s. The comedy continued when somebody thought I was Richard's wife later on.

But enough of the frivolity. The event itself was well organised, simple, dignfied and did Florence and Precious proud.

The main part was essentially non political. There was a bit of criticism about the actions of the UK Border Agency but I will write about that separately because there's a point to be made.

First was Precious' godmother, Chris Mercer who spoke about the little girl and how the ongoing ordeal is affecting her. She said that she felt that she was starting to relax a little bit after her spell in detention at the end of last year. She said that Precious was a child who always did what she was told and was almost too compliant. Chris explained how she was almost relieved when Precious confessed to tripping on purpose to get out of playing football, a sport she's not keen on, at her school. 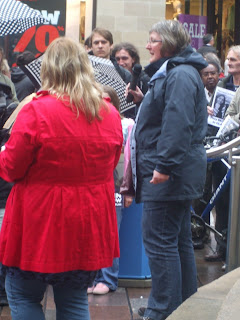 Then came Rev Muriel Pearson, who spoke about her admiration for Florence and the way she just got on with her voluntary work in the community, helping the elderly almost immediately the pair were released from detention last year. 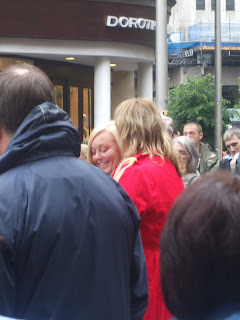 The final speakers were 10 year old Caitlin, Precious' best friend, who told how Precious was like a sister to her and how sad she would be to lose her. Her mother Elaine told how if you'd heard the girls chattering away you would be hard pushed to guess which one was Scottish and which one was born in Malawi.  That to me is the essence of why this case is exceptional and why Precious should stay. The reasons for the delays are the subject for another discussion, but the effect is that having spent her formative years here, Precious is now for all intents and purposes a Scottish wee girl. Her welfare must be the over-riding consideration and that means that she should stay hear. End of.

The video is the original song sung by Andy Stewart but here are the new words:

They belong to Glasgow
Dear old Glasgow toon
There'll be something the matter with Glasgow
If the Mhangos are not aroon
We're only common and working folk
As anyone here can see
But this is our city, they don't ask for pity
The Mhangos just want to be free.

Then a piper played us out to Amazing Grace.

The organisers had letters to send to Theresa May and also had the idea of getting people to write messages on post-it notes for Precious and Florence, who, they say, are sustained by these sorts of messages. It was difficult for me to decide what to write, but more so for Anna. She drew a bunny for Precious and signed it "lots of love, Anna, 11 years old". She was moved by the event and actually didn't complain about being bored once. She was more annoyed that people beside where she was sitting on the steps were talking and she couldn't hear some of the speeches.

Let's hope that common sense prevails for them and that the Home Secretary allows them to stay.
Posted by Unknown at 5:38 pm

Email ThisBlogThis!Share to TwitterShare to FacebookShare to Pinterest
Labels: Florence and Precious Mhango