It's been a busy week! On Monday night I went to Edinburgh to interview a real live author for Liberal Democrat Voice. Then late on Tuesday night I headed south to London on the sleeper. It's the first time I've done the sleeper in that direction and I can tell you that leaving from Waverley is a much better experience than leaving from Euston. In London, if you have a standard class ticket, you can only use the horrible, freezing cold, uncomfortable Network Rail lounge with its vending machines. In Edinburgh, you get a lovely lounge with pink armchairs, the telly and free hot drinks. I had a hot chocolate, which was lovely.

I was also lucky enough to have a room to myself on the way down. It's not that I don't like sharing, and, to be honest, with my snoring, it's the person I share with who is most deserving of your sympathy. It's nice to have all the space to yourself, though.

I didn't rush off the sleeper when we arrived at 6:40 am. When I arrive in Edinburgh first thing, I normally just throw on my clothes and head for the train home. In London, I had to make a bit more effort to be presentable. When I was ready, I phoned home and then headed for AMT for a chilli hot chocolate. That's a treat I allow myself when it's cold, and Wednesday in London, at barely above zero, counted as cold.

One good thing about buying a travelcard with your train ticket is that it works on buses and tubes. I decided to take the bus because you see so much more. The meeting didn't start until 1:30 so I decided to head for Kensington Palace. I took a number 10 bus to Hammersmith, passing the house where Millicent Garrett Fawcett lived on the way. I noticed that it was a bit misty, but little did I know that just a few miles away, a helicopter had hit a crane in it. I was warned on Twitter to avoid the area, and shortly afterwards, Bob rang in a panic to make sure I was ok.

It took half an hour or so to get to Kensington Palace. It was such a beautiful morning that I went for a little walk first. I found this atmospheric tree. 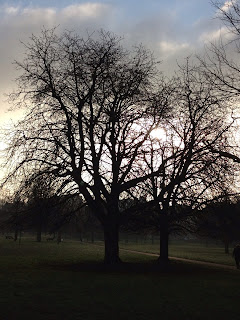 Then I went looked at the swans and ducks. 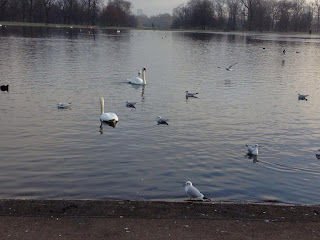 Doesn't look like the middle of a city of 8 million people, does it?

Here are the famous golden gates of the Palace: 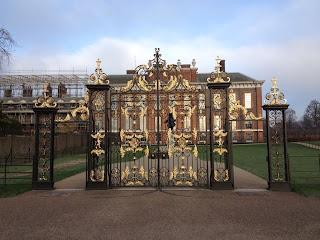 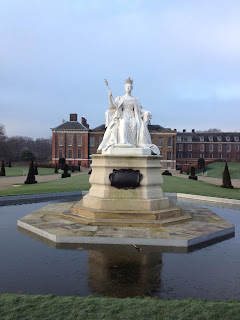 There are 3 exhibitions you can see inside and I had time for two of them. The most important for me was Victoria Revealed Ever since Edward VII was on when I was six, I've found that period of history fascinating. The social and political change that went on during the reign of Victoria interests me greatly. I was particularly keen to see the exhibition in the light of the documentaries about Victoria's relationship with her children which were shown over the New Year. The good thing about KP is that there are very knowledgeable explainers throughout the place. I met one in the room in which Queen Victoria gave birth to her first child. She was quick to speak up for the Queen, emphasising the isolation of her upbringing and how Albert had been quite controlling, separating her from the Baroness Lehzen, her governess who had practically brought her up and bringing her mother, with whom she didn't get on, back into her life.

It certainly must have been pretty scary to take the throne as a girl of 18. The dress she wore to her first Privy Council was on display in the room where it took place. I didn't see a copy of the Telegraph accusing Nick Clegg of snubbing her by not attending. I mean, from their point of view, it must have been a disourtesy not to have been born 130 years earlier.

There was a room dedicated to Victoria and Albert's courtship and early marriage, where the walls were inscribed with excerpts from their letters to and about each other. Victoria's wedding dress was on display, too.

The most fascinating room was the nursery where I'd met the guide. There was a touchscreen exhibition which showed sketches Victoria had done as a child along with cribs, toys and baby clothes. It struck me that the view from the window won't have changed that much in the intervening period,either.

The atmosphere, and decor, changed dramatically in the room where Albert died. The book from which his children read to him was displayed alongside a pretty harrowing account of his last moments written by the Queen herself.

The exhibition ended with film from Victoria's Diamond Jubilee.

Over the other side of the Palace, it was an earlier Royal Family who were the focus - William and Mary, who had come to take the throne away from the Catholic Stuarts in a bloodless revolution in 1688. The Queen's state apartments were full of modern packing crates as Mary of Modena's bed, where she gave birth to The Old Pretender, was being disassembled for removal to a new exhibition at Hampton Court Palace. The Secrets of the Royal Bedchamber opens in March.

There was a haunting display of the dreams of son of Queen Anne who died when he was 11. He described them to a governess who wrote them down for posterity.

I could have lost myself there all day and I didn't have time to explore the gardens or King's State Apartments so I'll be back.

I was heading for Lib Dem HQ in Westminster, so I decided to get a bus to Trafalgar Square and walk down Whitehall. Except I decided there must be a different route and if I just went down this particular path, I'd get there. Well, I was kind of right, but I didn't expect this spectacular view. 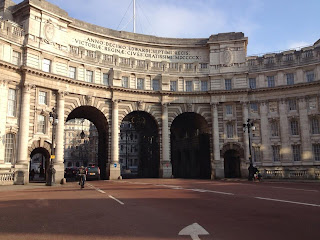 And I'd never seen Horseguards Parade before: 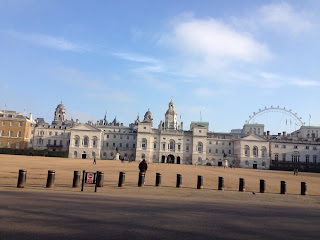 Nor could I hold my phone straight, but it was cold, I suppose.

And, finally, here's a gorgeous view of Buckingham Palace I'd never seen before. I'd seen photos of that view from that spot before but couldn't work out where they were taken. 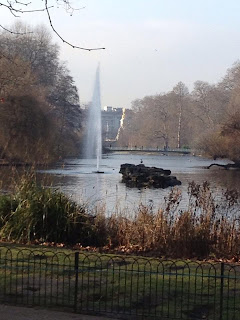 It was a lovely relaxing morning and perfect preparation for an intense and interesting meeting.
Posted by Unknown at 5:54 pm