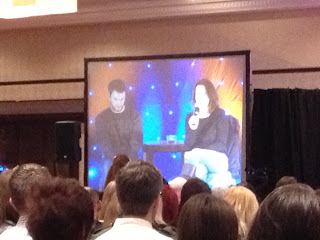 I know I'm late to posting this but, well, Christmas got in the way. When I came back from the Starfury: Midnight Doctor Who convention on 16th December, I had literally done nothing for Christmas. Santa had been briefed, but that was about it.I took notes from a few of the talks and the first one covers Gareth David Lloyd and Eve Myles from both Saturday and Sunday. They were both very relaxed and in great form, despite having been working since 9am having photos taken with huge amounts of people on Saturday and Eve in particular having a wee bit of a headache on the Sunday. She'd been up pretty late partying. I have to say that both of them were lovely to Anna. Gareth was really sweet when she had her photo taken with him and Eve showered her with compliments when we got her autograph.

You really do learn something new every day. One of the things they talked about was the shrine to Ianto in Cardiff Bay. I had a quick google to find an article about it and discovered that Peter Black, Lib Dem AM, had, in 2010, supported the Save Ianto campaign's aim to get him back on screen.

Anyway, Gareth did have a bit of a laugh about two things - dirty knickers on the shrine and he told how he'd found a woman crying at the shrine and gone up and tapped her on the shoulder. Can you imagine? going up to crying fans.

The circumstances surrounding Ianto's death were pretty shocking and emotional to watch. He was wiped out, as Gareth inimitably pointed out, by an alien fart. Anyway, what we learned was that the scene where Captain Jack wakes up after he too had been killed, again, was prey to a Barrowman prank. When Eve Myles pulled back the sheet covering Barrowman, she saw him lying there with a huge handlebar moustache.

Eve clearly enjoyed the weekend and said in the panel that it was "brilliant to get the opportunity to meet the people who watch our work." She added that it was "joyous" to have the weekend away on her own in a posh hotel minus her 3 year old.

She went on to say that she loved playing Gwen: It's great to play action figure who isn't size 6 & blonde."

Gareth said that Countricide was his favourite episode because: "They let us run around on the Brecon Beacons like loopy loos." At one location, Gareth banged his head on a bell. That didn't put him off going back there to get married. He discovered that they had moved that big bell higher because "some idiot had banged their head on it."

Gareth said that Ianto was supposed to die half way through the first series, so getting another two years was a huge bonus. He kept teasing us through the weekend that Ianto would come back, but said that this would cheat the drama they'd achieved. One of the things Gareth had to do as Ianto was kiss John Barrowman, a lot. When asked what it was like, he said. "Awful. I taught him everything he knows." Eve chipped in that Barrowman has no tongue.

Having said all of that, Gareth told us that a crew member's dog was really badly injured in an accident and faced being put down. Animal lover Barrowman paid a massive vet's bill to save its life.

Eve was asked how she would like the character of Gwen to develop in another series of Torchwood. She was quite unequivocal - it had to involve eating cake and shooting things. Oh, and she'd have to become a wine connoisseur and a black belt. She talked about how her little girl loved Merida, the Princess from Disney's Brave and how this character was a really good role model to both boys and girls.

She also talked about having to learn to ride a Harley, in about 20 minutes, for that scene in Torchwood: Miracle Day. She said that it was touch and go whether they would let her do it because the winds were really high. Gareth really took the mickey out of her when she said rambler instead of scrambler, too. He would have enjoyed the motorbike stunt as he said he loves extreme sports - he's a real thrill seeker apparently.

The questions people ask at conventions range from ingenious to downright weird. Someone asked Eve what she would do if confronted with 3 things: a gun, Barrowman and cake. She said she'd put the gun in Barrowman's hand, eat the cake and take them both home.

It's hard to convey just how irreverent and funny these sessions were. I would happily go and see either of them at a convention again. It might actually be good to get them on their own. They were fab together, but I'd like to see how they were when they didn't have the other to banter with.
Posted by Unknown at 10:38 am