What an idiot I am, assuming that there would only be one 30 Day Doctor Who challenge. The one Jennie's doing has different questions, and because I like those better, particularly the one about writers, I'm going to go with hers, which are below: 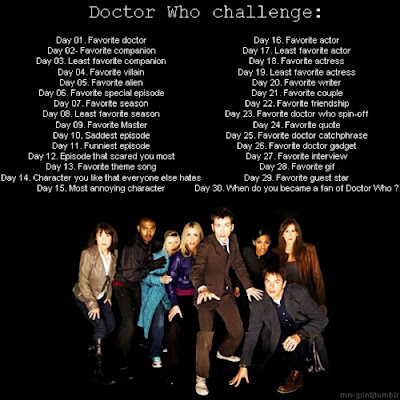 So, today's question is favourite companion.

I have loved very many companions over the years. I adored Ace. Maybe because I was in my early 20s when she came along, I didn't feel, like Jennie did, that she was taking the mickey out of me. Actually, thinking about it, I watched her live, which I don't think Jennie was old enough to do. I love her attitude, her feistiness, her humour, courage and vulnerability. Sophie and Sylvester were one of the best partnerships.

It took me a while to warm to Rose Tyler, but by the time she and Sarah Jane met up in School Reunion, I was a firm fan. I thought Billie managed the change from Eccleston to Tennant very well. They were two very different relationships, two very different dynamics. Nine was pretty high maintenance. Rose had to chisel through the bitterness to find the inherently decent bloke beneath. With Ten there was the chance to relax a bit and enjoy the relationship as it developed. This is where I disagree with Jennie. I don't think Rose was any less useful in the likes of The Idiot's Lantern, Fear her and Doomsday than she was in Rose Tyler. And as for 10.5 going to live with her, I get what Rusty was trying to do, trying to minimise the pain. Losing someone you love once is bad enough, twice, well, that's hell. I can let him away with that one. And, yes, I got carried away with the emotion of it all and lapped it all up.

Captain Jack - reckless, outrageous, gorgeous. Needed the watershed to maximise his potential, but he made me smile.

Amy Pond - Karen Gillan is such a versatile actress - no better than in The girl who waited where she had to play a much older version of herself. I loved the way Amy and Rory's relationship developed, how Amy made the Doctor buck up his ideas and brought a good dose of realism and empathy to many situations - I'm thinking now of the time when she was able to defuse Bracewell where the Doctor couldn't in Victory of the Daleks.

Donna Noble: Catherine Tate and David Tennant were such a good combination. She really knew how to take the wind out of his sails. She made a great start in the Runaway Bride which to this day is Anna's favourite episode.

Liz Shaw was great, a scientist with an open mind.

But there can only be one winner. She was everything the 7 year old Caron wanted to be, clever, pretty, a writer, compassionate, warm, curious. Sarah Jane Smith and Elisabeth Sladen, the actress who played her, both became heroines of mine. And how I wanted a pair of those red and white striped dungarees. I was gutted when Lis left. It was great to meet her at conventions in the 90s. There are some advantages to smoking and one of them is the interesting people you meet when out having a puff. Lis was great fun and she was one of the few famous people whose death has made me seriously cry. I've had her autobiography since the day it was published yet I've only got about a third of the way through because I don't really want to finish it. There's a reason my daughter's middle name is Elisabeth and nobody else was ever going to get a look-in for my favourite companion.
Posted by Unknown at 7:00 pm

I did watch Ace live, yes. I watched everything from Logopolis onward on broadcast, unless I was away.

With 10.5, I get that Rusty was trying to lessen the pain, but he did it in such a hamfisted and emotionally unreal way... How would you feel if you lost your beloved, but someone said "It's OK, though, you can have this guy! He looks exactly the same but doesn't behave the same or have the same attributes. That'll be OK, right?"

I think the Lalla Ward version of Romana is my favourite companion. I agree with you that both Liz Shaw and Sarah-Jane are very good (although Elisabeth Sladen improved as time went on - she wasn't quite as convincing in her early episodes). I also think that Polly and Nyssa are very underrated.

Amy is my favourite in the new series, and the best male companion is probably Jamie.