Labour doesn't get it and the fox shouldn't

Now, I know I'm feverish and delirious, but I know when you're having me on. I can't believe Labour have lost the plot this much... 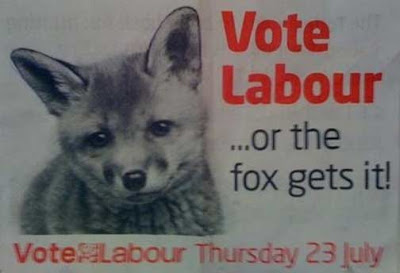 ...in a leaflet that has supposedly gone out in their name in Norwich North. Surely they couldn't be that crass or that stupid?

This must be a hoax, a plot to discredit them, mustn't it?

That was my first thought, but Charlotte said that as far as she knew it was a genuine Labour leaflet and I trust her.

Then I looked a bit further afield, and apparently it's not the first time they've used this phrase in a by-election according to their animal welfare society

Then I found a Labour supporting blog that seemed to think the leaflet was a good idea.

So, it's either genuine or a very elaborate hoax.

I've just shown my 10 year old daughter the leaflet and at first she was horrified. She thought it was quite sick. She said "Who would say that?"

However, she did come up with rather a good slogan: "Vote Liberal Democrat - the fox doesn't get it, but Labour does, and we don't have to have the Tories." Seems like a result to me!

No no no!! That's not the 'other side' of the leaflet! That's me that made the 'let's have some gratitude' bit!

The first one, the 'or the fox gets it' is Labour's own handiwork.

Must be the delirium getting to me. They do think like that, though - they put out something in Glenrothes about how the people owed their vote to Labour after all they'd done for them.

Your version did seem a bit blatant, even for them.

Sorry about the confusion!!

No, you're blameless, I must have taken some stupid pills earlier..