More on Peter Lyburn: the Pledges v the Reality

You have to see this in the context of someone who submitted an open letter to various newspapers on the Tories' plans not to go ahead with Labour's NI rise next year which was alleged to have the support of a number of listed local business leaders. Some of those business people have subsequently told the Courier they neither knew of the letter nor consented to their name being on it. 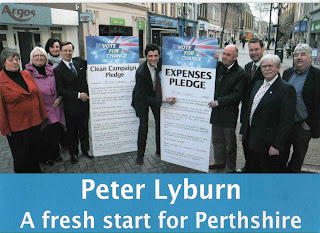 Anyway, here are Mr Lyburn's pledges to the people of Perth....

Pledge 2 "Not to mislead the public"

Pledge 5 "To fight a clean, honest and positive campaign."

With the Tories, between the idea and the action, there is usually a shadow - quite a long one in Mr Lyburn's case.

Subrosa has also written on this too. She shares my view that Lyburn should withdraw from the contest.

Happily, there's another Peter you can vote for if you live in Perth: Peter Barrett. I know him well and once he gets the bit between his teeth about something, believe me he doesn't let go - he would be a fantastic representative for the area and someone the people of Perth could trust to represent them on the national stage. I remember seeing an article in the Perthshire Advertiser describing him as the "saviour" of Tay Street after a long and successful campaign to preserve it. While I will admit to having teased him mercilessly at the time for being described in such a fashion, I know that he's creative, innovative, hard working and very genuine.
Posted by Unknown at 9:27 pm