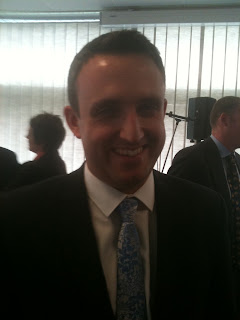 Liberal Democrat candidate for the Lothians list and Edinburgh Central Alex Cole-Hamilton took part in Brian Taylor's Big Debate on Radio Scotland this lunchtime, along with Angela Constance from the SNP, Lawrence Fitzpatrick from Labour and Edinburgh Central Tory candidate Iain McGill.  It was held in West Lothian College in Livingston so I went down to be part of the audience.

Ok, I know I'm biased, but Alex put in an awesome performance. He was confident and assured and had a good, people centred answer for every single question he was asked.  There was much discussion about cuts in the FE sector and young people. West Lothian College has had its budget cut by 10%. Alex talked about there being a crisis in FE and how the Liberal Democrats would throw it a £21 million lifeline. For someone who is a education spokesperson on the Council, Lawrence Fitzpatrick was shockingly bad, spouting rhetoric about Labour protecting working class kids backed up with absolutely no substance to back it up.

There was only one person who had any time at all for the Tory plans to allow people to leave school at 14, many making the point that there aren't enough college places and apprenticeships for 16 year olds, yet alone 14 year olds.  I loved it when Alex took Angela to task on Scottish Government interference and expectations on teachers - suggesting that teachers might have a bit more time to get on with making lessons more engaging if they didn't have to spend time filling in forms for ministers in Holyrood, or reading through instruction manuals the size of telephone directories.

The room was so stacked with SNP members, that even Lawrence Fitzpatrick decided to out himself as being in favour of a referendum on independence. Seems to be a bit of a habit from Labour. First it was the Council Tax Freeze which they'd opposed for 4 years. Then it was free prescriptions which they'd also opposed. I managed to make a point about this - seriously, nobody, absolutely nobody that I come across outside politics, in my normal everyday life, nobody at the school gate or the zumba class talks about this. They talk about being worried about losing their jobs, or about the amount it costs to fill the car or get their weekly shop, or the failure of the Council to clear the roads in Winter, but I don't sense a burning desire for a referendum on independence. Angela Constance jokingly replied to me that I need to get different friends.

Labour's natural desire to suck everything into the centre came to the fore when discussing the idea of a National Care Service. There was very little support for it in the room - certainly in West Lothian, you wouldn't really want to fix something that's not broken, although I'm not convinced the set up is as unique as they think, because it sounds similar to what they do in Edinburgh, joint working between the NHS and Social Services to make sure people get decent care and aren't kept in hospital longer than necessary.  I don't think Labour really think of people as individuals, just as some amorphous blob with the same needs when in fact people have all sorts of unique circumstances and need their care to be tailored to them, not delivered according to the diktats of some bureaucrat in St Andrew's House.

The last question was about free prescriptions. I totally get the logic behind it, but I feel a bit guilty about it because I can afford to pay £3 or £5 for the drugs I need and I feel that giving me free drugs is costing money that could be better used elsewhere - and now the charge has gone, I don't even have the option of paying as I did sometimes - I have a condition which exempts me from all charges. Anyway, I got the chance to make another point - taking the Tories to task for the fact that they would charge everyone on £16000 plus for prescriptions at the same time as giving a £200 tax cut to rich pensioners - a point which was then made much better than I did by Alex.

You can listen to the the whole thing here.

Just as an aside, I also managed to get a photo of Angela, wearing her ubiquitous orange scarf 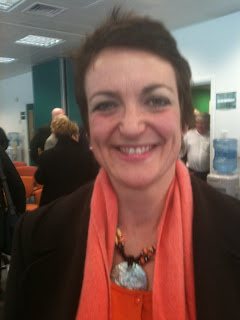 I kid you not - she is wearing that scarf as part of the same outfit in every single photo in her recent leaflet - at the local community centre, at the hospital, at the school, at the local park, and so on. Now, she has visited these places many, many times. You could never accuse Angela of not being interested and involved in the local community - she has supported local schools and organisations all through the 11 years I've known her and before that. She'd obviously just been round and had all the campaign photos taken in one day, so I teased her about it. As she said herself, it's not like she doesn't have enough clothes. On the other hand, I teased Jo Swinson way back in 2005 for putting out leaflets which showed her over a period of about 18 months with about 6 different hairstyles, so maybe I just like being contrary.

I was really proud of Alex today - his persuasive and down to earth manner, and his grasp of the issues would make him a formidable force in Parliament so I really hope he gets there.
Posted by Unknown at 5:31 pm