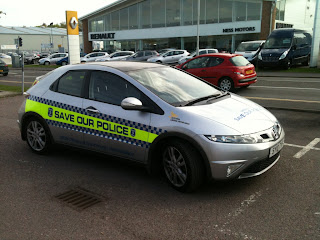 Look at this cool little car! This morning Tavish Scott was in Inverness to see it off on a two day journey round Scotland to highlight the Liberal Democrats' opposition to the centralisation of Police forces. He was joined by Highlands candidates Christine Jardine, Alan MacRae, Angela McLean, Jean Davis and Thomas Prag.

It carries the message that proceeding with Tory, Labour and SNP plans to merge police forces could cost 3000 jobs of bobbies on the beat. Even more importantly to me is that all the decisions on law enforcement will be in the hands of two people, a chief constable in Glasgow or Edinburgh and the Justice Secretary. Just imagine if they decreed that all officers across Scotland should carry tasers. The relationship between the local community police officer and the quiet highland villages he or she works in would never be the same again.

Anyway, if you see the car in your area, it's being driven by one of my favourite people in the world who will be meeting up with local candidates on the way.

I'm hoping to have more pictures from the launch later along with a very interesting police related story which highlights the SNP's recent vagueness on this issue.
Posted by Unknown at 11:42 am