Save our Police: Tavish takes the campaign to the Scottish Police Federation Conference. #sp11 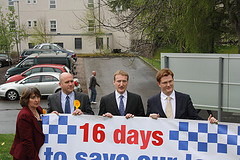 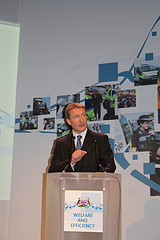 Tavish told the Conference that the idea was wrong for Scotland:

“The Scottish Liberal Democrats oppose the creation of a single Scottish police force. “This proposal is wrong for Scotland. “Our single chief constable wouldn’t be out in the country helping communities. “He or she would be in Edinburgh, standing on the other side of the First Minister’s desk and taking their orders from the top down. “So we say no to one chief constable answerable to one First Minister.
“We say no to the direct injection of politics into policing.
“Now, there may – just – be some people here who served during the 1980s miners’ strike. There have been other disputes and protests as well. “You will know how difficult the police found their position then. Too often accused by the strikers of being the agents of the Thatcher Government. “Now imagine how difficult your job would have been with a single police force; to keep the peace and keep the confidence of the community.  The public would have seen the Scottish Chief Constable on a fixed-term contract, capable of renewal at the discretion of the Minister, taking orders from the Government.  That’s what could have happened then. “In tough situations of conflict, who is going to believe that you are acting on anything else but the orders of the Government? “That is why a single police force puts politics first, why we believe it will make your job more difficult.  And why it is wrong for Scotland. “Political interference in policing is wrong.”