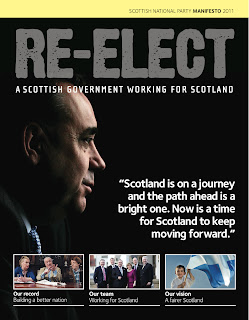 So, the ego has finally landed (a phrase which I'm sure must have been used about Alex Salmond before, so I'm not going to pretend for a minute that it's original, although I have no idea where I heard it).  The SNP's manifesto was launched today in Glasgow. I reproduce the front page of it from their website merely to illustrate how much like the poster for a thriller it looks. Gone are the soft focus and bright optimism of 4 years ago. Now it's all dark and brooding, with Alex looking like he's in the middle of a Dan Brown novel or something. My husband thinks more along the lines of Iain Banks. And I'm not convinced he looks like the hero either.

I want you to remember both things before I tell you about a couple of the things in this tome.

Firstly, the sneering at the Liberal Democrats' innovative idea to turn Scottish Water into a Public Benefit Corporation and use the £1.5 billion of money it owes the Scottish Government to kickstart the economy because we didn't have the consent of George Osborne signed in blood. Governments aren't given to agreeing to opposition party's manifesto pledges and as Tavish said on Newsnight last night, that would be taken forward on the basis of two Governments talking to each other. But this is money that we at least know for sure exists and have a good chance of getting.

Secondly, my SNP = Salmond Nicks Policies post which exposes certain similarities between our policy for a Scottish Futures Fund announced last Tuesday and the SNP's equivalent announced two days later. Except ours is 5 times bigger, of course. The Magpie Manifesto also contains some more of our policies - help for small businesses to take on new staff,  support from an investment bank for exporters, enterprise zones, improved mobile phone coverage, better help in schools for young carers, support for the ‘No Knives Better Lives’ project,  the power for communities to take over public assets, sports hubs in schools, an increased proportion of the transport budget on ‘active transport’ and even “Ten Ambitions for Scotland”.  All of these were in our manifesto. They are good ideas, though, regardless of that.


Anyway, it appears that the SNP's five times smaller Future Fund is going to be paid for by savings on a bridge that isn't even built yet. Surely you can't count the money as saved until the final piece is put in place. At least that's what a responsible person does.

And then they are projecting £1.6 billion savings in the Police in 4 years' time. Like....how? The Party has been touting its support for a national police force for months on end - but in the manifesto - it's all very non committal. They want to protect numbers but there's a whole load of waffle about how. They told the BBC, though, that it's based on 3-4 police forces. So they've clearly been threatened by the success of the campaign against led by Tavish Scott to not want to be associated with the single force, but not really to offer a concrete alternative. And they say Liberal Democrats sit on the fence.

Where the manifesto falls short is on mental health - just a load of waffle really in contrast to our understanding of the need to recruit more therapists and deliver more services locally, we'd have to wait until 2020 for decent broadband across Scotland, instead of within this Parliament from us, the funding floor for local authorities is 85% rather than our 90%, meaning that Councils in the North East of Scotland will be disadvantaged.  They've committed to a five year Council Tax freeze, but nothing to help the poorest pay, like we do by taking any pensioner with an income of less than £10,000 out of having to pay it.

The Independence Referendum is back as well, no surprise there. It's just really funny that on the page talking about independence, the first words are "No-one cares". That was certainly the experience of the National Monologue which attracted the attention of a sum of people equal to less than a third of the SNP's own membership.

It would be wrong of me to say that there weren't some good and welcome policies in that document, mainly because they're in ours,  but some of them are built on pretty shoogly foundations.

Just as a final wee thing, page 20 has a spread of pictures entitled "Our People" which is genuinely kind of sweet. There's pictures of weddings and exceptionally cute little babies. It's different to see Hello style coverage in a manifesto, but I'm not opposed to it. The only thing is, I wonder how many people will know who they are. As an experiment, I asked my husband. He recognised lovely bride Nicola and sleepy contented looking daddy John, but he thought Shirley Anne Somerville was Susan Deacon and had no clue about Aileen Campbell. The page after that was a tribute to key figures who had passed away - Jimmy Reid, Bashir Ahmad, Jimmy Wolfe, Neil McCormick.

So that's my whistlestop and not entirely objective guide to the SNP manifesto. I hope you enjoyed it.
Posted by Unknown at 8:31 pm

"Governments aren't given to agreeing to opposition party's manifesto pledges..."

Caron, I just can't get my head round that statement. The Lib-Dems are the Government. The Treasury is run by a Scottish Lib-Dem. Danny Alexander isn't stiff arming some Labour or SNP proposal, this is a proposal which is designed to get his own party which is in Government across the UK elected in the Scottish elections.

If Tavish hadn't the gumption to even discuss his proposal with his own party in government before he launched it into the world it doesn't say much either about his competence or the competence of the Scottish section of the Lib-Dems.

Did he just not expect the question, "As the party of Government you have cleared this with the Treasury haven't you?"