I had great fun yesterday. I spent it writing envelopes with lovely people in the Dingwall HQ of Skye, Lochaber and Badenoch candidate Alan MacRae. Alan is amazing - hailing from Skye, he lived in Edinburgh (where he had a fabulous restaurant, First Coast, and has returned to live in the north. He's put so much energy into his campaign for the past two years and I know what it would mean so much to him to represent his home area in Holyrood. He has the emphatic backing of former MSP John Farquhar Munro to succeed him. John Farquhar put out handwritten letters endorsing Alan and appears on every single piece of his election literature.

Anyway, here's a photo some of my fellow campaigners 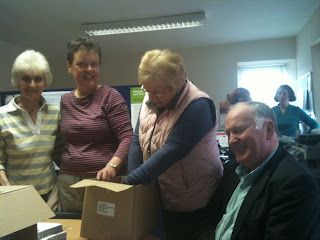