Due to work, by-elections and illness, I haven't been near the Edinburgh Festival Fringe for years, but yesterday we went in with my sister and her children, none of whom had ever seen the colourful and varied array of street performers who take over the High Street in August. They were amazed by the woman with nearly 7000 piercings and the various "statues" - although they may not have been as taken with the heavily bronzed young man wearing nothing but a gold garment which just concealed his modesty as my sister and I were. We were solely impressed by his ability to maintain his statue positions, of course. 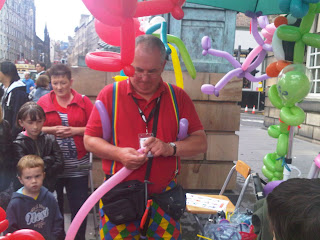 Our first stop, though, was at the High Court, where a nice man called Ian was making balloons. 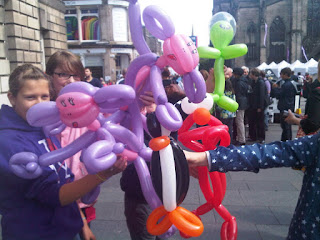 A while and two monkeys, an alien, a monkey and a penguin later, we had 5 happy children. Elmo and the Penguin survived intact until the end of the day, but the others all sustained various deflations and injuries.

We took advantage of the Historic Scotland memberships we took out at Fort George last week to go to Edinburgh Castle. It was so busy that we didn't get round everywhere, but there was a funny moment while we queued to see the Crown Jewels when my sister gathered us all round and suggested we make a plan to steal them. Unfortunately our hastily concocted idea of using the balloon animals as decoys didn't work - but maybe I blew our cover by tweeting about it. We also discovered that they make wonderful, if expensive, chips in the Queen Anne Cafe there. They taste and look home made and are worth the cost. Our cream teas, however, weren't as good as Linlithgow, though.

This has become a must-see show for Anna in recent years and she was really excited about going. The principle is simple - it's like a normal comedy club - a succession of stand up comedians, but at a sociable hour and with no swearing or rude content.

Anna was desperate to be in the front row as she had been one of those "picked on" last year, but we got there too late for that, even though we arrived a good 20 minutes early for the 5.30 start.

The compere was James Campbell, an experienced children's comedian who was very, very funny.  He knew exactly how to get the audience eating out of his hand - animal stories with a touch of child appropriate rudeness formed the main theme of his first stint and subsequent linking slots. It didn't take me long to find this (not behind the paywall) Times interview with him from 2004.  You will be disappointed if you go looking for Byronesque good looks, though, as he's had a haircut and a shave since then.

The first guest performer was a young man called Will, one of the graduates of the London Comedy Academy for kids. When he finished his performance, he looked really disappointed with himself, but I think he showed loads of potential. It's certainly true that he didn't have people rolling in the aisles with laughter - but we were smiling. Perhaps his material - a joke about sat nav, for example, was just a little bit old for the age group he had in front of him, but he delivered it well. He could maybe have linked things together better but that, as well as fine tuning his ability to read and react to an audience will come with practice.  He had stage presence and the ability to gain the sympathy of the audience well. I think he may have fared better with an audience of teenagers.

The second guest performer was James Acaster who was also very funny, telling stories about learning to juggle as a cub scout and the like. There were a couple of times when you could see him pulling himself back from doing stuff a bit too grown up for his audience. He interacted well with the audience and wasn't afraid to look like a complete prat in the process, trying on some sunglasses in a bid to look cool. That was never going to happen while he was wearing old man's trousers, as I'm sure he was aware.

One thing I will add (this is much later as I forgot to put it in earlier) is that there were no women. Obviously the line up changes every year, but in 3 years of attending, there's only been 1 woman out of 9 performers. I'd be interested to know why that is and whether the organisers will address it in the future.

I think the show was well worth the £5 ticket price. It's also different every day so I'm tempted to go back this year. All the kids enjoyed it to the extent that we bought James Campbell's CD at the end.
Posted by Unknown at 12:26 pm

Remarkably well timed Caron. I'm off there in a couple of hours with family so good to know that young AND old ones in the group will enjoy themselves.