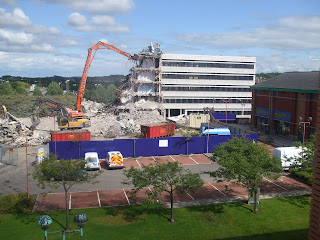 It's the end of an era in Livingston as the old Council HQ, West Lothian House, is being systematically demolished as I write. The photo was taken at around 3 this afternoon. I have to say that it's one of the ugliest, most unimaginatively designed buildings ever so I certainly won't miss its soulless presence on Almondvale Boulevard. However, I've had good memories in that building - of various meetings (and excellent buffets) with the highly efficient and well regarded elections staff.  It was much nicer inside than out - and you had the added benefit, a bit like the Scottish Parliament, that if you were in it, you couldn't see the outside.

Those staff now operate in a glittering new HQ which was built, much to my annoyance, on a patch of parkland Anna and I used to call Teletubbyland because of its lumps and bumps being very similar to the landscape in that programme.

Apparently one of the delights we will get in place of West Lothian House is a Primark which to be honest is no earthly use to me. I want an Evans back. On the bright side, elsewhere in the town, a Sainsbury's is opening before Christmas.

I can hardly believe the development that's taken place in Livingston in the decade we've lived here. When we arrived, there was no cinema and hardly anywhere to eat in the centre of town with a reasonable, but not spectacular selection of shops. Now, we have a huge Wal-Mart (which I try to avoid on account of it being them), 3 shopping centres of not necessarily complementary designs, a Debenhams, Marks and Spencer, Matalan, a cinema, Wagamama and various other restaurants, and a Toys R Us. To my great delight we now have a Waterstone's. To have a place without a decent bookshop is just plain wrong and it took until the end of 2008 for that to come along.

I do love living in Livingston. We've made loads of friends here and it has loads of amenities as well as being convenient for Edinburgh, Glasgow, Stirling, Perth and Fife. The demolition of West Lothian House is a further dismantling of the 60s concrete jungle and another welcome step into the 21st century.
Posted by Unknown at 4:52 pm

Email ThisBlogThis!Share to TwitterShare to FacebookShare to Pinterest
Labels: Livingston