I feel so rubbish today. Totally exhausted, and everything hurts. If I hadn't been so thirsty, I probably would have stayed in bed. 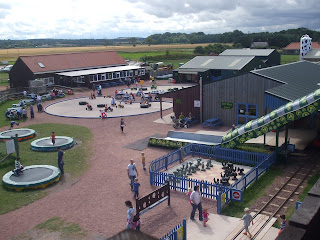 This is entirely down to me completely overdoing it yesterday when we went to the East Links Family Park near Dunbar. Bob and Anna went last year when I was ill, but it was a while since my only visit there and it's changed beyond all recognition. When I took Anna as a toddler, I remember feeling vaguely cheated that I'd driven the best part of 50 miles and paid loads of money for a slightly better version of the Almond Valley Heritage Centre down the road. However, they have clearly expanded in my absence, this year adding a huge play fortress. What's great about it is that there's loads of rope bridges, scramble nets and various obstacles for the kids, but you can also walk right to the top - and you can even get wheelchairs up there. The amount of thought that's gone into the design is really impressive. You can get down from the top in several ways, but I chose the quickest - down the 4 lane covered slide which you can see in the photo above. And I did it twice. That probably explains why my back hurts so much today but it was fun.

In addition to the Fortress, there is a large outdoor play area with go karts, little tractors for smaller children, a hill to sledge down, a flying fox which Anna said was one of the better ones she'd been on and various other of the usual sorts of playground things.

Mind you, hurtling myself down a slippery metal bumpy thing was nothing compared to the scariness of getting in a kart - one of those where the kids sit in the front and the adults pedal behind - with my husband. I'd long thought of hiring one of these in Mallorca, but that was before I found out what a maniac my dear husband of almost 22 years is at driving them. He did his best to frighten the living daylights out of me, especially on the section through the woods where, with nobody else around, he made it go really fast and swerve from side to side. At one point I actually screamed, much to Anna's (and Bob's) amusement. I have to say Anna was entirely on her Daddy's side on that one.  It's a long time since I've had such a fit of the giggles, though.

Any farm park is going to be full of the cute and this one was no exception, a cria (baby llama), a gosling which followed us around and was quite assertive with the older birds who tried to push it out of the way to steal its food and, sadly, orphaned 3 day old piglets being hand reared (every 2 hours) by the staff and a bambi were in addition to the usual farmyard crew of sheep, goats and chickens.

It cost us £29 to get in and I'd say it was value for money. I love the way these farm parks charge you to enter and then make you pay to feed their animals too - that cost us probably another £4, but to not do it would be cruel (to the children, not the animals).

The cafe was very good and, as these things go, reasonably priced.  Bob and I had well filled, tasty baguettes and hot chocolate, while Anna had 2 cheese toasties and Irn Bru and it came to £13.60. We returned later for a tea, coffee and more Irn Bru (well, it's the holidays) and a cake for Bob which cost another £5.70.

We also luckily ran into our friend Andrea, whom we hadn't seen in years, with her 2 children, Rhodri and Brianna.

All in all, it was a fabulous day out and I think we'll try and head back at Christmas to see what their Winter Wonderland is all about. Paul Freeman commented on an earlier post that there is a beautiful beach next door to the Farm Park, but we didn't get to see it yesterday. I was pretty tired when we left, and it was pouring with rain so we came straight home, but bear that in mind if you go there.
Posted by Unknown at 10:42 am