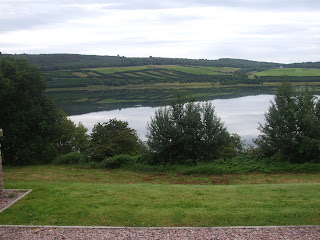 This is the view from Swallow Cottage which sits slightly above Munlochy Bay, on the Black Isle just north of Inverness.  It was taken at around 7.30 am on Friday 6th August and as you can see, at high tide, the surface of the bay is like glass.

We spent a week of our holidays there and I'm probably mad giving you the link, because we want to go back. The visitors' book is full of people who have returned time and time again to take advantage of the spectacular scenery. In fact, I was quite concerned when, having read through it, that one family who seem to have been there every year since the cottages were first let in 2001, didn't come this year. Hannah family from Glasgow, I hope you're all ok.

From our vantage point on the terrace, looking at that gorgeous view, we saw all manner of wildlife - not just the friendly goats who would come to visit. Bob saw ospreys, red kite, buzzards. However claims that our neighbours in the semi detached Roebuck Cottage had seen a wild cat were met with derision by my friend Gavin who knows about these things and who suggested that it was probably a large tabby.

The road in to the cottage is not for the faint hearted. You turn off the A832 Cromarty road just before Avoch. The single track road you join is like a motorway compared to what's to come.  One night we cane back and found a mummy grouse and her little chick wandering in the middle of this road, not having much of a clue what the verge was for. We were held up for ages until they decided to opt out of a bend and go straight on down a dirt track. Bob came across them a couple of days later, too.

After about a mile and a half, you turn off again. The road narrows significantly and there's grass growing in the middle of it. There is still tarmac, but it kind of just peters out. After half a mile or so, you come to a lovely viewpoint at the mouth of the bay and then the road really gets interesting. The tarmac is no more. You have a beautiful dry stane dyke on your right and, on your left, after some fields and cottages, is a significant drop into an old quarry. There is a fence, but as Anna said, it's only wire and sticks between you and a hefty bump. At the end you come to what the directions euphemistically describe as a sharp left hand turn. Yes, so sharp that you can't do it in one. Thankfully there is a turning point. We managed it quite easily in a Micra so I wouln't worry too much about how you're going to get there, but I wouldn't do it in the Winter time.

The road in and the peaceful location fool you into thinking that you've gone to the middle of nowhere and beyond, but in reality you are only 20 minutes from Inverness and an hour and a bit from the glorious Wester Ross coastline which really does have a thrill round every bend. We went on a day trip to Ullapool and took the coast road round to Gairloch and back to Inverness. It's around 170 miles in all, but well worth it for some of the most spectacular scenery you will ever see - rocky, mountainous coastline, unspoilt beaches of the most beautiful golden sand, views over to Skye and beyond.  By the way, if you go to Ullapool, you'll see a chip shop, called rather arrogantly The Chippy,  which advertises itself as having won awards, and maybe it has, but on that day, we had the worst fish and chips we had ever had. Way too much batter even for me, flavourless fish and skinny little ordinary chips that you could get anywhere - all with service which bordered indifferent and surly. Our local chippy in Livingston would beat them hands down. 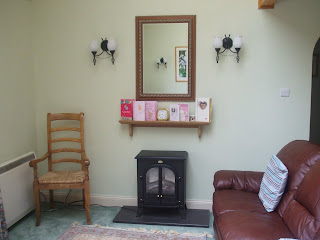 Back to the cottage, it's very comfortable and almost perfect. When you arrive you find that not only have you been left a welcome pack of the staples like butter, milk, bread, tea and coffee, but also a basket of muffins. Ours were chocolate with white chocolate chips on the top. The kitchen is well equipped with a washer dryer and a dishwasher.

There are two bedrooms, both with big en-suite bathrooms with over-bath showers. The one criticism I'd make is that the mattresses on all the beds are incredibly soft. I like mine to be a bit harder, but I have to be honest and say that I still managed to sleep very well. 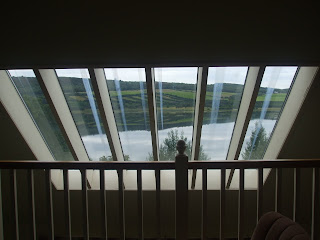 Upstairs there's a tv room with well stocked bookcases.  It's the view from the big window, though, which takes your attention.

What would make the place perfect would be wi-fi, although I'm sure that many people would disagree that you either want or need internet acesss on holiday. It would have been good to have been able to look up places to visit - although there is a huge, fat file of ideas of things to do - and we didn't even scratch the surface.

When I saw on the internet when we booked that there was a payphone, I prepared myself for not having mobile reception, but in some parts of the cottage and on the patio, it was fine.

We just loved the cottage and hope to be able to get back there next year - it really is a perfect base for us and suits all 3 of us.
Posted by Unknown at 1:07 pm