The Max Mosley and Bernie Ecclestone School of Charm - Lesson 1 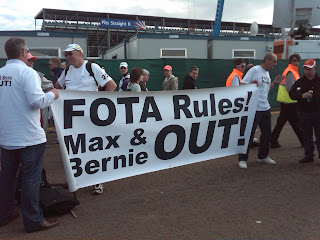 Twitter has been buzzing today with reports from people at the British Grand Prix at Silverstone, including Nickie. She posted this fabulous picture which shows off their very professional looking banner and t-shirts supporting the breakaway teams (FOTA) and politely calling for the removal of the FIA President and the commercial rights holder. They were standing near the pit lane exit.

It's not difficult to sympathise with Nickie and many other fans when you read what the said Max and Bernie have been up to in the last day or so.

Imagine there's a crisis in your world, you've seriously pissed off some key players -in fact, most of the people you work with. They've had enough of your antics and are going to leave you high and dry because you have been such a thrawn, glaikit numpty. For those of you who are unfamiliar with the Scots vernacular, that means a stubborn, ignorant twit. Not only that, but virtually the entire world is pointing the finger at you and blaming you for what's happened. So what do you do?

You would think that you'd try to find some way of making amends, bringing people together, trying to move forward. But then if you were that sensible, chances are this crisis wouldn't have happened in the first place.

No, instead, you try to find a fig leaf of legal protection to hide behind and then give a long interview to the media in which you dismiss the people who are going to walk away from you as "loonies".

That is exactly how FIA President Max Mosley described some people within FOTA to the BBC. You can see the interview here. The BBC's fabulous anchor man gives the impression of handing him just enough rope. The best bits are between about 10 and 13 minutes in.

It's appalling that he could be so dismissive of people who have decades of experience in the sport and whose talents and expertise have built it up to be the worldwide phenomenon that it is now. The whole interview has the tone of a stern parent whose children have run away from home saying "Och, they'll come home when they're hungry." How patronising can you get?

To add insult to injury, you then have the commercial rights holder Bernie Ecclestone, in a live tv interview on the BBC saying, when confronted with the fact that the drivers have so far agreed with FOTA, that "drivers don't think". It was quite funny that he said this in front of David Coulthard, who has had a long and successful driving career and is still the Red Bull test driver.

Thee comments just show the lack of respect Max and Bernie have for the other key players in Formula One. They clearly think that they alone are responsible for its success. It's no wonder the sport's in crisis. I'm surprised the teams have put up with this sort of treatment for so long!

In other F1 news today, the Guardian reports on how the BBC is hopeful of getting out of its contract to show F1 if FOTA breakaway. Ha ha!

And lovely Ross tells us F1 belongs to the people

LibDig This!
Posted by Unknown at 6:26 pm