The picture Max Mosley doesn't want you to see 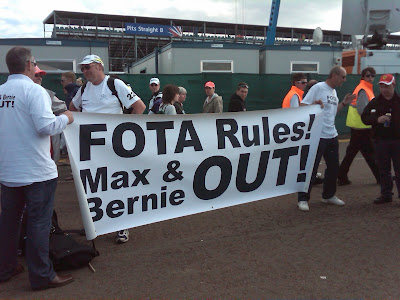 Yes, I know it's the same one as posted earlier, courtesy of Nickie, but since then I've seen a tweet from someone who said he'd overheard a conversation at the British Grand Prix at Silverstone to the effect that broadcasters had been politely requested by the powers that be not to show Max Out banners.

If that's true, then it's pathetic. It's also very stupid, because it only draws attention to the whole thing.

If you've been to Silverstone with any sort of anti FIA/Max material, take a photo and send it to me at caronsmusingsatgooglemaildotcom and I will happily put it up here! I'm not scared of Max!
Posted by Unknown at 10:04 pm