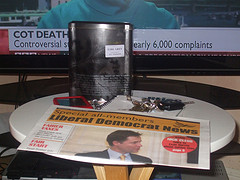 Inspired by Ellen, who asked what our Daily Essentials were, I very tastefully arranged the photo above. That'll do for today's Photo A Day. I'm determined to stick to posting one photo every day this year so I have a complete record of 2011.

The photo is not exhaustive so we'd probably best start with what's missing.  I have a policy of not posting photos of Anna on my blog, so she isn't in it. Closely related to her, are cuddles. My absolute favourite moment of Christmas Day was when she happily and unexpectedly came and gave me a cuddle rather than dive headlong into her Christmas stocking.  Whatever we've done, whatever mood we're in, I couldn't imagine a day without her. I know I'm stoking myself up for some sort of really major Empty Nest Syndrome, but we'll deal with that when it happens. As things stand, she says she's never leaving home, but I have at the back of my mind that she may well want to go backpacking with a boyfriend called Scum all too soon.

Of course there's Bob, too. We always speak before he goes out to work (even if all he gets is a sleepy snarl if I'm not ready to open my eyes) and there's usually an exchange of e-mails during the day. There's not been very many days in the last 23.5 years when I haven't spoken to him at some point. If we're apart we tend to speak several times on the phone. The exception to that was when I went to New York, pre mobile phone and internet days.

I do like my sleep, and plenty of it. There are many things I don't get about Margaret Thatcher, but her ability to survive on 4-5 hours' sleep a night comes close to the top of the list. That can't be good for a person and it must affect your decision making capability. If I get less than 8 hours, I find it tough the next day. If I get less than 8 hours on two consecutive nights, then I turn into the Witch Queen from Hell, and if it goes on any longer, you really are best off not being anywhere near me. I did think about dragging the duvet into the picture, but decided against it.

But going on to the picture, in the background is the television. I do watch too much of it, I know, but having been stuck at home for quite a lot of time being ill over the past couple of years, it's been an essential companion, from rolling news channels, to Doctor Who to the trash you all know I love to decent drama. That reminds me - Lark Rise to Candleford starts again on Sunday and I haven't watched the last episode of the last series yet. It's been waiting for me on the Sky Plus for months so I'd better get it watched over the weekend.

Going to the photo now, the tin is for Earl Grey teabags. I seriously could not survive without the stuff. Much to the consternation of certain people, I put milk in it. It's warm, delicate flavour is exactly what I need to get me going and keep me focussed throughout the day.

Then there's the car keys. There's nothing like a spell of illness where you can't go out to make you appreciate your mobility when you have it. I don't use the car every single day, but knowing that I could if I needed to is really important to me.

Also in the photo is a notepad and paper. For all the electronic gadgetry I have, if I'm making notes about something, or making a list, I feel much better writing it down the old fashioned way.

Then there's a copy of Liberal Democrat News to symbolise how important the party is to my life. Sad and pathetic though it may be, there haven't been many days in the last 28 years when it's not been in either my thoughts or timetable at some point. Whether it's writing a blog, or being part of an election campaign, or going to a fundraiser, or seeing one of the very many lifelong friends I've made through being a Liberal Democrat, the Party is always there in the backdrop of my life. Even when things happen that I don't like, I can't imagine ever not being a part of it.

Underneath that, there's a copy of a certain monthly politics magazine. I would never want you to get the idea that anything Iain Dale produces is essential to my life, but it's there to symbolise two things, a thirst for information and gossip about all sorts of politics and also a need to read. I could easily have put one of the many books that threaten to take over my living room, bedroom, kitchen and landing. In the worst days of my illness, I found it hard to concentrate on books which was horrid, and instead read lots of newspapers and magazines, with their shorter articles and many photos. Thankfully normality is being restored now and my Amazon habit is flourishing. I literally have been a bookworm since before I could walk and I can't see that ever changing. Again, I'm a bit old school on this and would much rather read an actual book, or magazine, or newspaper, than a gadget with the same stuff on it. So, Rupert Murdoch, you can stick it with your pay wall. If I want to  read your paper, I'll go and buy it.

And, finally, there's my iPhone. My friends and family are incredibly important to me and being able to keep in touch with them is vital. It's all so much easier these days with Facebook and Twitter. I know that if I have that little box of tricks with me, I can contact my nearest and dearest whenever I want, or they can get hold of me.

What are the things you couldn't live without?
Posted by Unknown at 6:04 pm

Email ThisBlogThis!Share to TwitterShare to FacebookShare to Pinterest
Labels: Personal

Hi Caron, That's a much better considered list than mine. When I consider it, the car - or other ability to get around - is one I take for granted.
And I also put milk in Earl Gray - I like it that way.

Ellen, apart from the Lib Demmery, we could be (non identical) twins:-)