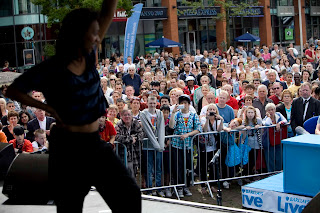 Former Strictly professional Karen Hardy, who won with Mark Ramprakash in 2006 and who has one of Strictly's most fondly regarded partnerships with Bill Turnbull to her credit, will be in Glasgow this Saturday, 22 January.

She's going to be one of the panel for the Barclays Live Dance Competition at the St Enoch Centre. She'll be leading a dance masterclass too - I wonder if it will be the same routine as featured in the BBC ident and the Strictly Roadshows. Karen is one of the most talented and creative choregraphers I know and all my friends who've had lessons with her say she's a fabulous teacher, so if you like Strictly and want to meet her, get down there on Saturday. There is some vague connection, I think, to the opening of a new branch of the bank in Glasgow at 83 Argyle Street, but you can just ignore all of that and concentrate on the dancing.

Karen will be judging 10 of the city's top dance acts who will be whittled down to 5 by the judges. There will then be a public vote on the web and the winner will win £1000. They will then progress to a further stage of the competition where there's another £1000 up for grabs.

This is the first time the competition has been held in Scotland. I can't think of a better way to brighten up a miserable January day.

I'm gutted that I probably can't go as I have a meeting in Edinburgh on Saturday morning, but I'll certainly try and get across later if time and energy permits.
Posted by Unknown at 5:08 pm