Twenty years or so ago, I may have been a little surprised to read in Kitty Kelley's biography of Nancy Reagan that then White House Chief of Staff James Baker had apparently used some fairly serious swear words at the first lady in response to one of her excesses, but I was young then. It was probably more of a shock because of the more obvious piety of the US politician and was an early lesson that things may not always be as they seem.

Like most of the rest of us, politicians swear. So what? Nothing to see here.

John Major, one of the nicest people in politics, called his some elements of his parliamentary party and cabinet colleagues bastards. To be fair, I quite agreed with him at the time.

But 15 years on from that indiscretion, Scottish Conservative leader Annabel Goldie has taken some stick for using the word "bullshitters" in an interview.  I suspect that the outrage has more to do with her being a slightly posh, matronly lady than anything else. I don't remember the National Campaign for Courtesy jumping on David Cameron for saying "shit happens" or on Tavish Scott for saying "bollocks".

My husband is a lovely man, but he, who worked down the pit for 20 years for goodness sake, has an issue with women swearing. I've made it my life's work to desensitise him from that notion, with limited success. He will no doubt be very proud of Anna, who has decided that her mummy swears too much and if she can't stop it, she's going to at least make some money out of it.

Yesterday she wrote out a list of swear words - not the actual words,  you understand, because she doesn't use them, but, as you'll see, the words they rhyme with. 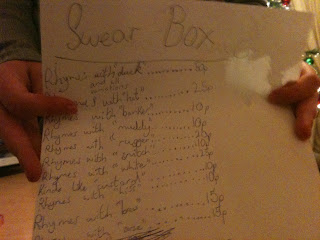 For those of you who can't read her writing, we have:

I'm sure Annabel would applaud the entrepreneurial spirit shown by an 11 year old.

No doubt the rest of you will have dismissed me as a thoroughly bad mother by now. In my defence, although the list is wide ranging, I am actually able to spend most of my time stringing fairly articulate, profanity free sentences together.

Annabel's genius, of course, has been to use a naughty word, probably knowing that the media would throw their arms up in horror that a lady would behave in such an ungenteel manner, thus deflecting attention from what she actually said:


The Tories, on the other hand, are going to "tell it as it is," said Goldie.

"There is going to be no bullshitting… (and) you can use that," Goldie told Scotland on Sunday.

"I think people are fed up to the back teeth of politicians, who dance on a pinhead, who are evasive…are ambivalent."

If you were looking for industrial strength bullshit, Conservative Party HQ in Edinburgh is the first place you'd go. They do talk a lot of nonsense. Up here for the last four years, they've been nothing but Salmond's wee helpers in the Parliament. Their Borders MSP John Lamont was for the Borders Rail Link before he was against it, he stood for the Westminster Parliament while an MSP despite David Cameron saying that shouldn't happen. The Tories go on all the time about how they support business, but when they had the chance to put their money where their mouth was, they voted against a Liberal Democrat motion to give help to businesses struggling with huge business rate hikes.

And then there was Annabel's last foray into straight talking - last January, when she basically told the Scots that it didn't matter what they thought, David Cameron would get his majority without them.  Thankfully that didn't happen, and we have Liberal Democrats in Government working every day to take the sting out of the Tories, delivering on ending child detention, making the tax system fairer, giving deprived kids a better start to their education, restoring the Pensions/earnings link, giving justice to Equitable Life policyholders, kicking the renewal of Trident into the long grass for hopefully long enough to build a consensus that we really don't need nuclear weapons in this country, giving more powers to the Scottish Parliament and much more.
Posted by Unknown at 12:19 pm

So you live with a sexist and an illiberal child who wants to censor your expression, and thereby your thoughts? Poor you ;)

I have a mouth like a navvy, and I'm unashamed. Swearwords are words like any other, and they have their place and their use. I am fully against censorship of language. Most of the objections to (particularly women) swearing spring from a desire to put one back in one's place... Fuck that.

And also, as your article points out, canny women can use swearing to deflect outrage... How uch better would it be if the swearing didn't cause an eyebrow raise, but the egregious Toryness did?

I think that has to go down as one of the best comments ever. I think I want to print it out and put it on the kitchen wall:-).

I bet Anna will still charge me for every swear word in the post, including yours:-)

I suggest that if you must pander to your daughter's rank profiteering that you at least negotiate a season ticket rate.

Are swear boxes subject to VAT? Does Anna know about tomorrow's increase? It wouldn't do for her to discover that not all VAT inspectors are liberals...

I'm just relieved there is no mention of Jeremy Hunt, Culture Secretary