Subrosa has tagged me in a meme where you are supposed to post a picture of where you blog.

Well, I would normally have pretended I hadn't seen it, because the kitchen table, where I normally type, is usually a tip. I expect Stephen and others who know me well, will be shocked at the photo I'm about to post. I was determined that we'd eat our Christmas Dinner around it, so I had a good clear out before the holidays. 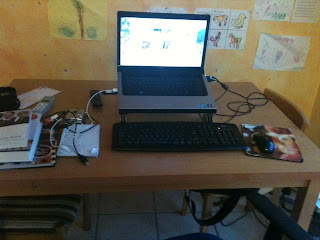 The kitchen, to me, is the heart of the house and I'd much rather be down here than shut away in the study upstairs. And there's a tv in here (or at least there is until we go digital - I have a notion that there isn't a little digital box on the market which will bring our ancient portable into the 21st century) which means I can listen to the news of PMQs or whatever as I type. I also have access to Bob's stereo down here, but don't tell him, because he doesn't like me playing what he considers as inferior music on it.

Having said that, these days, I tend to head for the sofa in the lounge with the laptop if I want to watch tv and tweet or blog at the same time. At those times, I'll be blogging from here, but, clearly, with no polar bear. 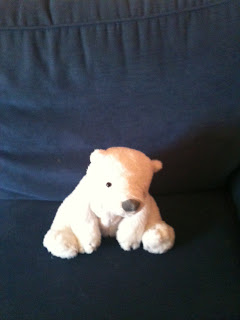 The bear, along with the books on the kitchen table (Stephen Fry's autobiography and a Doctor Who visual dictionary) are the results of a trip to the shops yesterday to spend our Christmas vouchers. I've always believed that a house can't have too many books, and Anna has now added cuddly toys to that adage. Trouble is, there's hardly any room for the people to live.

Subrosa said that she was interested in my set up because I "am clever with social networking equipment". There's not so much to tell here. The white cable you can see is for my iPhone, which I used to take the photo. That little box of tricks is undoubtedly the best gadget I've ever had in my life. It gives me the capability to keep in touch via e-mail, Facebook and Twitter wherever I am and its app store has endless fascination. All that, and, thanks to iTunes and their free 12 days of Christmas downloads, I can now watch The End of Time Part One anytime, anyplace anywhere.  I have the BlogPress application which I occasionally use so in theory I could write a post wherever I happen to be. To be honest, though, the keyboard on the iPhone is a bit on the small side for typing long posts, and I haven't yet figured out how to use it for linking and posting photos which I assume it does. I suspect it'd all be a lot easier on the iPad. Maybe 2011 is the year I'll get one of those.

So that's about it, really - a wee snapshot of my natural habitat. Some will suggest that there should be a glass of red wine there, but this photo was taken before breakfast.
Posted by Unknown at 3:55 pm

Email ThisBlogThis!Share to TwitterShare to FacebookShare to Pinterest
Labels: Memes

Great post Caron and thank you for taking up the challenge. Like you I prefer to me in the heart of the house and my wee bit space is a room off the living room, so I hear the tv and call my opinion - as you can imagine. Then it's an old house and quite quirky in part of the layout. Was more than quirky before a refurbishment some years ago. :)