Who did Mike Moore describe as "annoying as Hell" at Dunfermline dinner?

Last Friday night, Dunfermline Liberal Democrats held their Annual Dinner in the Council Chamber at the Dunfermline City Chambers. That's an auspicious room for the local party: it's where Willie Rennie and Jim Tolson were selected as candidates, and where we celebrated when Jim was elected in 2007. Secretary of State for Scotland Michael Moore was the guest speaker: 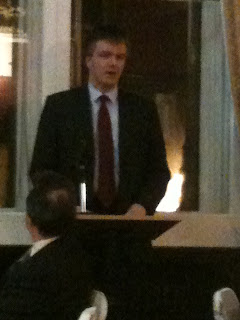 The Dinner was the first opportunity for the newly revamped kitchens to show what they could do. They produced an excellent meal of Carrot and Coriander Soup, Chicken Balmoral (chicken stuffed with haggis in a whisky sauce), and Mixed Berry Pavlova. The food was delicious and the staff were friendly and pleasant, so a definite thumbs up from me there.

It was great to see everyone again. I had missed Jim's office Christmas Party because of the snow so it had been a wee while. Mike Moore is not one for salacious gossip at the best of times, he's way too nice, but there was a particularly gratifying moment during his speech when he jokingly (I think:-)) described Willie Rennie as "annoying as hell". I'm sure there's plenty Council officials he wrote to over the years who might agree, but there will be even more local people who appreciated the help he gave them. And, of course, if they vote Liberal Democrat on the list in May, they can have him back as a regional MSP. 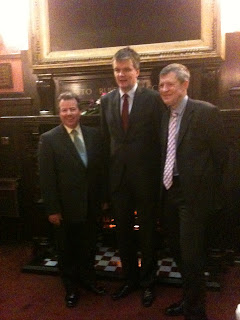 I was actually very disappointed not to win one item I put in a bid for in the silent auction - window cleaning by the aforementioned Mr Rennie. For comedy value alone, this was truly priceless. Thankfully the person who did win has a large house with plenty windows and is likely to call in his prize at a post-election party. There will be photos, I can promise you that......................

On a serious note, I'm sure it wasn't just the merlot that made me feel a bit emotional when Mike Moore talked about how it felt to carry his Liberal Democrat membership card into the Cabinet Room in 10 Downing Street and take decisions which would put our long cherished values of liberty, equality and community into practice. He talked about the stresses of dealing with a £155 thousand million deficit but still being able to take nearly a million people out of income tax come April with our first raising of the tax threshold. He talked about ID cards becoming a thing of the past, ending child detention, bringing in much more flexible parental leave, the Scotland Bill, which the Tories would most likely have shelved on their own.

Mike had spent time, like most of our ministers, in the recent Oldham East and Saddleworth by-election, where we did much better than expected. He said that there was a really good reception on the doors, something that I think is mirrored across Scotland.

Anyway, it was a super, fun evening - very lucrative too, because a fair amount was raised for Jim's campaign.

Here is one final photo of Mike and Jim Tolson with some of the local West Fife Liberal Democrat Councillors who have done loads of good things in administration - getting another Dunfermline High School built, for a start. Labour let the last one deteriorate into a disgraceful state. 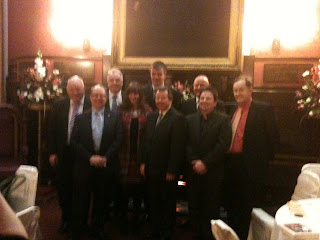